The trade deadline became a bit more suspenseful this past weekend when the Athletic reported that Washington outfielder Juan Soto turned down a $440 million, 15-year contract offer to stay with the Nationals.

Suddenly, social media was ablaze with talk of Soto possibly being traded, and what kind of incredible offer it might take to acquire him.

A deal involving the 23-year-old superstar would be seismic because of his talent, his youth and the fact that he’s not due to be a free agent until after the 2024 season. Any team considering acquiring Soto would have to weigh how likely he’d be to stay there, but even 2 1/2 years of him could be worth quite a bit.

It’s moments like these that online trade simulators were meant for, and baseballtradevalues.com was probably getting a lot of hits Saturday. That site tries to put a figure on a player’s value, while accounting for his contract status. For example, Soto’s trade value (his projected on-field worth minus his salary) is listed on the site as $193.7 million, trailing only Wander Franco ($286 million), Ronald Acuña Jr. ($221.2 million) and José Ramírez ($209 million) in all of baseball.

So when using the site’s trade simulator, the goal is to line up a deal in which the Nationals get around $193.7 million in value in exchange for Soto. Let’s have some fun with this.

For the purposes of this exercise, we’ll assume all no-trade clauses will be waived as needed. All prospect rankings are from MLB Pipeline, and trade value figures in parentheses are in millions:

If a player like Soto comes available, you immediately start thinking about wealthy teams already in contention – the franchises that can benefit right away from adding him and have the wherewithal to keep him long term. The Dodgers and Yankees fit that description, but they only have one top-25 prospect each.

In this deal, Boston would be giving up the No. 10, 14, 44 and 64 prospects — and Bogaerts, a four-time All-Star who can become a free agent after this season. If Washington feels it can extend him, would a trade like this make sense?

Walker is the game’s ninth-ranked prospect, and Carlson and Gorman are high draft picks who have reached the big leagues but haven’t turned 24 yet. O’Neill hit 34 homers last year.

Washington would receive baseball’s No. 1 prospect (Greene), the top pick in the 2020 draft (Torkelson) and a 25-year-old (Skubal) who has shown promise in the majors. Detroit made a deal like this when it acquired Miguel Cabrera, but that only worked out because the Tigers were able to keep him long term. It makes little sense for them to bring in Soto unless they’re prepared to spend what it takes to hold on to him.

San Francisco has come back to earth after its 107-win campaign a year ago, so perhaps the Giants would want to pursue a reboot with Soto. In this deal, they’d have to trade two top-25 prospects and an impressive young pitcher in Webb, but if they could keep Soto they’d have a lengthy window to build a good roster around him.

Even if San Diego only had Soto for a couple years, teaming him up with Fernando Tatis Jr. and Manny Machado is an enticing idea. And the Padres can afford to move Abrams because of Tatis’ presence. Whether this package is enough to move the needle for Washington is another matter.

This seems far fetched, in part because Miami is in Washington’s division, but if the Marlins want to shed their reputation as a franchise that lets superstars go, there’s no time like the present. The value numbers line up for this trade, and Miami could pull it off while still having a nucleus of Sandy Alcantara, Jazz Chisholm and Pablo López waiting to play with Soto. The Nationals get two top-25 prospects in Pérez and Meyer, plus two 24-year-old big leaguers in Rogers and Sánchez.

Now we’re into fantasyland — or are we? Having largely wasted a decade of Trout’s greatness, would the Angels hit the reset button by dealing him for another star outfielder seven years younger? Trout has a huge contract of his own, but if the Nationals were prepared to give one to Soto, perhaps they’d be willing to pay Trout and hope he can keep playing at an MVP level well into his 30s.

And last but not least, a bonus deal for those of you who just like to watch the world burn:

Clayton Kershaw retired the first 21 batters and threw eight innings of one-hit ball as the Dodgers beat the Angels 9-1 on Friday night.

The Dodgers had a tougher time in their win Wednesday. They trailed 6-0 in the seventh before rallying for a 7-6 victory. Their win probability was at 0.7% with two outs and nobody on in the top of the seventh, according to Baseball Savant.

Will Smith hit a two-run homer that inning. In the eighth, Mookie Betts hit an RBI double and Trea Turner added a two-run single. Max Muncy hit a sacrifice fly in the ninth, and Hanser Alberto finally put Los Angeles ahead with an RBI single. 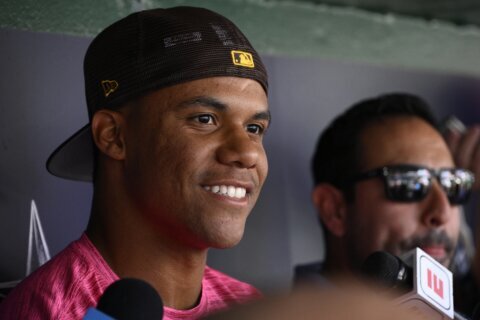 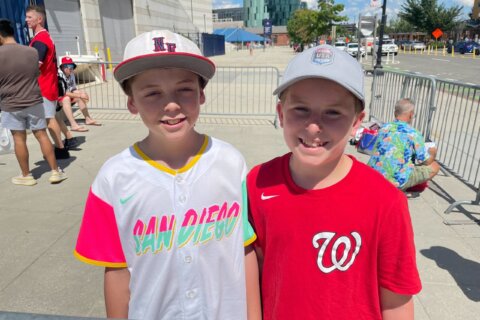