Mark Canha led off with the first of his four hits, Starling Marte followed with a homer against Patrick Corbin and the New York Mets rolled from there, totaling 17 hits in a 10-0 blowout of the Washington Nationals on Tuesday night.
Listen now to WTOP News WTOP.com | Alexa | Google Home | WTOP App | 103.5 FM
(1/8) 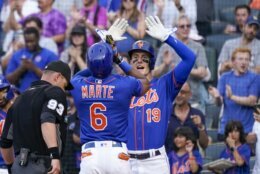 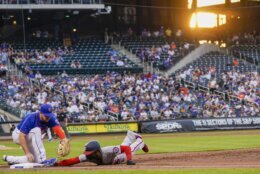 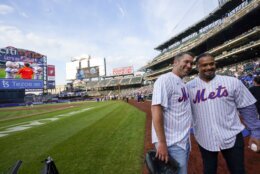 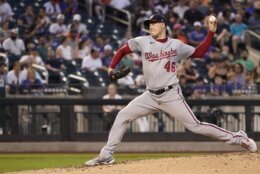 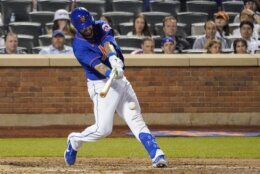 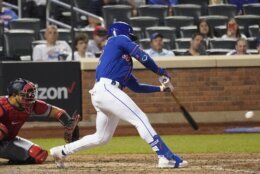 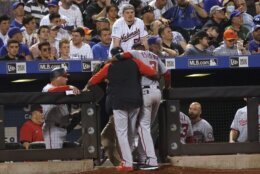 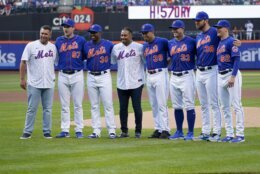 NEW YORK (AP) — Mark Canha led off with the first of his four hits, Starling Marte followed with a homer against Patrick Corbin and the New York Mets rolled from there, totaling 17 hits in a 10-0 blowout of the Washington Nationals on Tuesday night.

Jeff McNeil had three hits, Eduardo Escobar homered, Francisco Lindor extended his RBI streak to nine games and every Mets starter had at least one knock as New York followed a 13-5 thrashing against Washington with another laugher.

The NL East-leading Mets have won a season-best five straight, all during this six-game homestand, which ends Wednesday against the Nats. They have at least 16 hits in consecutive games for the second time in a week. They hadn’t reached that total in two straight games previously since 2018.

Corbin (1-8) allowed seven runs and 12 hits, the last a screaming comebacker by Tomás Nido that knocked over the pitcher like Charlie Brown. Corbin appeared OK, but manager Dave Martinez promptly pulled him anyway. The left-hander completed 4 1/3 innings, and his ERA rose to 6.96.

Trevor Williams (1-3) pitched five shutout innings against a Nationals lineup missing Nelson Cruz, who sat out with a left ankle contusion. Williams got his first victory as a Met after being acquired last July.

The Nats had six hits, three of them by Dee Strange-Gordon.

Canha tied his career high for hits, last achieved as a rookie on Aug. 18, 2015, with Oakland. His single and Marte’s two-run homer the next at-bat gave New York a second straight hot start — the Mets led 12-4 after four innings Monday.

Marte’s drive was caught by fan Alan Alcantara, who reached over a railing and snagged it barehanded with his 1-year-old son, Levi, cradled in his other arm.

Mets reliever Drew Smith pitched for the first time since dislocating his right pinkie Sunday and struck out four in 1 2/3 scoreless innings.

Nationals shortstop Alcides Escobar was helped off the field by a trainer after making a diving stop on J.D. Davis’ grounder in the fourth inning.

Mets fans channeled their Bronx rivals and did a roll call for New York’s fielders during the ninth inning. After chanting for Marte, Lindor and the rest, they began shouting out broadcaster Keith Hernandez.

The Mets celebrated Johan Santana on the eve of the 10th anniversary of his no-hitter, the first in franchise history. Santana threw a ceremonial first pitch to Josh Thole, his catcher for his 134-pitch gem against St. Louis. Manager Terry Collins was also on hand. The trio posed for a photo with the five Mets pitchers (plus catcher James McCann) who combined for the franchise’s second no-hitter last month.

Nationals: RHP Joe Ross will have season-ending Tommy John surgery, clouding his future with Washington in his final year under contract. … RHP Stephen Strasburg will make his first minor league rehab start with Triple-A Rochester on Friday. Strasburg has been out since last June following surgery for thoracic outlet syndrome. … RHP Jordan Weems and LHP Francisco Perez were called up from Triple-A. RHP Andres Machado was demoted to Rochester and RHP Austin Voth was designated for assignment.

Mets: 1B/OF Dominic Smith was optioned to Triple-A Syracuse after hitting .186 in 101 plate appearances. … RHP Adonis Medina was called up from Triple-A and pitched the ninth. … CF Brandon Nimmo was out of the lineup for the fourth straight day with a sore right wrist. He entered to play defense in the ninth. … RHP Tylor Megill (biceps inflammation) threw a simulated game and could make a minor league rehab start soon.

Minor league left-hander Evan Lee was in Washington’s clubhouse Tuesday and could make a spot start Wednesday, which would be his major league debut. RHP Carlos Carrasco (5-1, 3.98) is slated to pitch for the Mets.