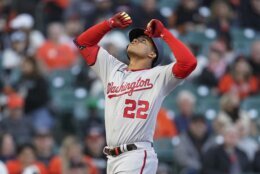 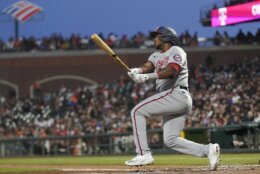 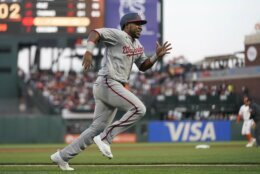 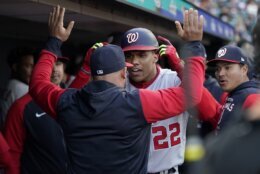 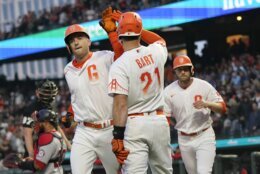 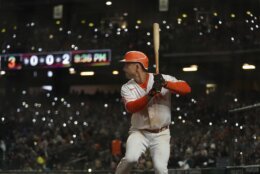 Jason Vosler and Joey Bart homered for the Giants, who played without several regulars due to a COVID-19 outbreak.

“We recognize that we’re going to be compromised from a roster perspective but that we’ve been compromised before,” Giants manager Gabe Kapler said. “Come back tomorrow, do a really good job with our preparation and our practice and our process getting ready for the game.”

“It felt great,” Robles said through a translator. “You’re happy about your teammates playing well and then they start cheering for you and giving you a little bit of momentum.”

The Nationals’ 14 runs were also a season best. Washington had scored just 16 total runs during its eight-game skid.

Aaron Sanchez (1-1), who pitched for the Giants last season, gave up three runs in five innings.

“Great team win, for sure,” Sanchez said. “The guys came in behind me and did their part. It was close there early, but they gave me a cushion to just go out there and attack the zone.”

San Francisco OF Jason Krizan made his major league debut after spending 11 seasons — and more than 1,100 games — in the minors. The 32-year-old started in left field and went 0 for 3 with a walk in front of his family in attendance.

Due to the Giants’ COVID-19 outbreak, the team has decided to close its clubhouse to media and non-essential personnel through the weekend.

“We have concerns about the levels of contagiousness in the clubhouse,” president of baseball operations Farhan Zaidi said. “We obviously really value our media and want their access to be a priority and we just feel like that environment is unsafe right now.”

Zaidi said the club consulted with Major League Baseball in making the decision.

“They have concerns about anything that can be perceived as restricting access,” he said. “They were sympathetic to the fact we’re working under very specific circumstances now where we think there really is heightened risk of spread.”

Nationals: LHP Sean Doolittle (left elbow sprain) and RHP Hunter Harvey (right pronator strain) did not travel with the team, remaining in Washington to work with the medical staff. Both were placed on the 10-day IL last week.

Giants: OF Joc Pederson was diagnosed with a Grade 1 adductor strain after leaving Wednesday’s game against Oakland. He is listed as day-to-day, though an IL stint could be necessary. … RHP Alex Cobb (right adductor strain) threw a two-inning side session Thursday and could start Sunday’s series finale against Washington.

Nationals RHP Joan Adon (1-3, 6.98 ERA) faces San Francisco on Saturday. Adon gave up five runs in four innings against the Giants on Sunday in a 12-3 home loss. RHP Logan Webb (2-1, 2.96) starts for San Francisco after limiting the Nationals to three runs in 6 2/3 innings in Sunday’s win.