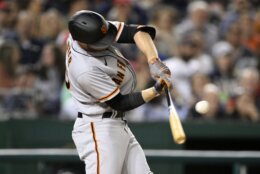 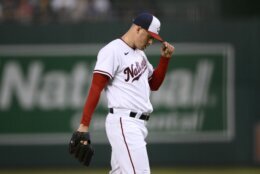 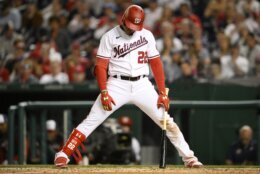 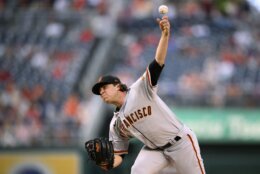 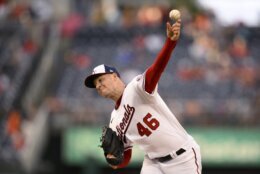 With two outs in the top of the ninth on Friday night and San Francisco ahead 7-1, the Giants’ Thairo Estrada took off on an 0-1 pitch and Brandon Crawford blooped a single over Washington shortstop Alcides Escobar, who grabbed the ball and threw out Estrada at the plate.

Heading off the field, Escobar walked over to the third-base line and began yelling into the Giants’ dugout. He was soon joined by Victor Robles. Manager Dave Martinez and group of Nationals came onto the field and Martinez guided Escobar off. The Giants remained in their dugout, and the incident didn’t escalate further as San Francisco beat Washington 7-1.

“They did some things that we felt like (were) uncalled for,” Martinez said. “But you guys can ask Gabe Kapler about that.”

Kapler has made it known he doesn’t believe in the unwritten rules of baseball, such as no bunting or running with a big lead. He said his team was playing aggressively out of respect for Washington’s lineup.

“We scored seven runs in an inning tonight. With Josh Bell and Juan Soto and Nelson Cruz in the middle of their lineup, we know they’re capable of scoring seven runs in an inning as well,” Kapler said. “It’s definitely not about running up the score. We felt like we’re respecting our opponents and we’re gonna respect our opponents at every turn. This is about using every tool at our disposal to compete.”

The confrontation was the only tense moment late in a contest that was decided early against struggling Nationals starter Patrick Corbin.

Austin Slater smacked a three-run homer as part of a seven-run second inning. Slater, who struck out looking in the first and was hitting .105 (2-for-19) coming into the game, lined Corbin’s 2-1 sinker to right center with one out to make it 4-0.

“After the first at-bat, Gabe pulled me aside and just reminded me I was a good hitter and said ‘Swag it out and be you and remember you’re a good hitter,’” Slater said. “I guess the pep talk worked.”

Brandon Crawford doubled leading off the second and then capped the scoring with a three-run double just beyond the reach of a diving Lane Thomas in left-center. That chased Corbin (0-3), who allowed seven runs on seven hits and three walks while recording just five outs.

“Just putting too many guys on base, not making pitches, not getting ahead of guys and staying on the attack,” Corbin said. “It’s obviously been frustrating. I’m just trying to do everything I can to talk to whoever, try to figure out how to get better.”

The left-hander who helped the Nationals win the 2019 World Series has been one of the worst starting pitchers in the majors since. Corbin went 9-16 with a 5.82 ERA last season and Friday’s outing sent his ERA to 11.20 in three starts this year. He still has three years left on a six-year, $140 million contract.

Maikel Franco hit his second homer of the season for Washington. Soto singled in the first and his third-inning double was his 500th career hit, but he was thrown out trying to stretch it into a triple.

Outfielder Luis Gonzalez was called up from Triple-A Sacramento on Friday. He entered as a pinch-hitter in the eighth inning and became the 1,000th person to play for the San Francisco Giants (1958-present).

Giants LH Alex Wood (1-0, 1.93 ERA) is 5-4 with a 2.77 ERA in 13 career starts against Washington, the last coming with the Reds in 2019 when he allowed three runs on six hits over five innings in a loss. The Nationals haven’t announced a starting pitcher for Saturday. 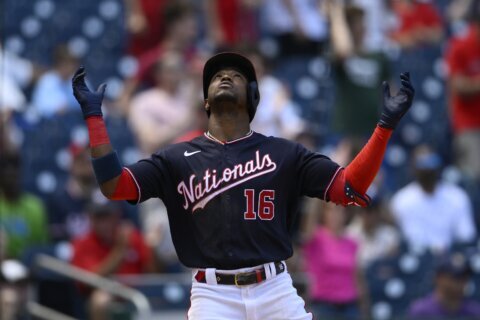 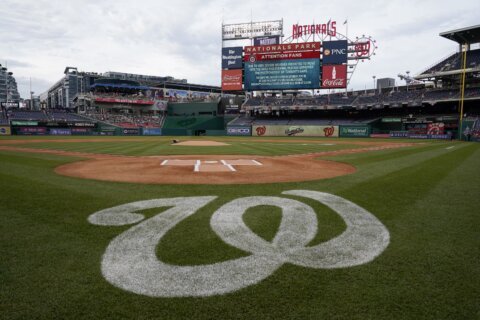