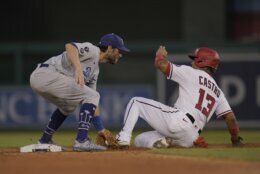 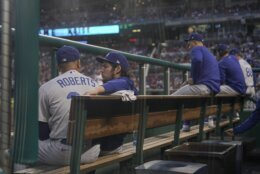 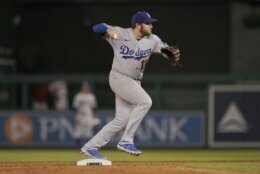 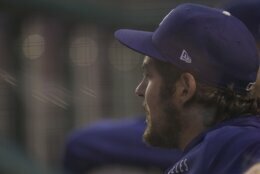 WASHINGTON (AP) — Max Muncy hit a grand slam to lead the Los Angeles Dodgers to a 6-2 rain-shortened win against the Washington Nationals on Thursday night.

A tornado warning caused the game to be stopped before the top of the sixth began. The delay lasted 1:17 before the game was called.

The victory extended Los Angeles’ winning streak to six games since the Chicago Cubs threw a combined no-hitter against the Dodgers. They are a season-high 19 games over .500.

As for the rally since the no-hitter?

“I know the easy answer is, ‘It’s baseball,’” Roberts said. “That’s why it sort of drives us crazy at times. But, we love it.”

The loss snapped the Nationals’ four-game winning streak. They entered the four-game series as one of the hottest teams after winning nine of 11 and 14 of 17 to climb back into the National League East Division race.

Muncy hit an 0-1, center-cut slider from Patrick Corbin (5-7) into the Nationals bullpen in the fifth inning to put the Dodgers in front, 6-2.

A.J. Pollock started the fifth with a home run. Muncy’s team-leading 18th home run, and second career grand slam, cleared the bases later in the inning. The Dodgers batted around in the fifth to knock Corbin out of the game.

“I thought Corbin was throwing the ball really well, then all of a sudden he gives up a grand slam to Muncy,” Nationals manager Dave Martinez said.

Victor González was the Dodgers’ late choice to start the game, replacing Tony Gonsolin. Roberts was concerned about threatening weather and Gonsolin throwing just a couple of innings if he started. González faced just four batters before Phil Bickford came in for him. Gonsolin (1-0) entered the game in the second and threw 52 pitches.

Kyle Schwarber led off the game with a double down the third base line. Juan Soto’s single to center drove him in and gave the Nationals a 1-0, first-inning lead.

Albert Pujols’ single to right field on a 2-2 pitch in the fourth scored Chris Taylor to tie the game. Washington regained the lead when Starlin Castro singled home Josh Bell in the bottom of the fourth.

The Nationals had to use a make-shift infield. Backup catch Alex Avila started at second base for the first time in his career because Trea Turner was hurt and Jordy Mercer was unavailable.

Avila entered the night with 924 appearances at catcher, 46 at first base, three as a pitcher, and one at third base. He found out about 90 minutes before the game he would be playing second and borrowed a glove from Mercer.

“Obviously being in the middle of the infield was something very new,” Avila said. “…at the same time, I was trying my best to have fun with it and not embarrass the team.”

He caught a soft liner from Muncy in the first inning and cleanly handled a grounder in the second. Both plays were followed by a smirk.

Nationals: OF Andrew Stevenson (right oblique strain) took swings in the batting cage on Thursday. Stevenson was placed on the 10-day injured June 18, retroactive to June 17. He said he hopes to be activated in the coming days.

Mets: SS Corey Seager (fractured wrist) was moved to the 60-day injured list on Wednesday. Seager was injured on May 15 against Washington. The move was procedural, Los Angeles manager Dave Roberts said, because nothing has changed with Seager’s projected return. He remains out until after the All-Star break.