Referees, rookies and a fired up punter. Get caught up on everything that happened at Washington Football Team practice on Wednesday, Aug. 4.
Listen now to WTOP News WTOP.com | Alexa | Google Home | WTOP App | 103.5 FM

ASHBURN, Va. — After the Washington Football Team completed its stretching on Wednesday, everyone circled up for a pre-practice hype speech. The man who delivered it launched into a quick but loud tirade, imploring his guys to, among other things, “get it going!” Once the huddle broke, it became clear who was behind the inspiring (and, again, loud) words.

It was Tress Way.

Punters aren’t usually (or ever?) charged with firing a squad up, but Way sure got the job done. It was a Pro Bowl outburst from a Pro Bowl specialist.

Now that you know how the session began, let’s get you caught up on everything else that followed… 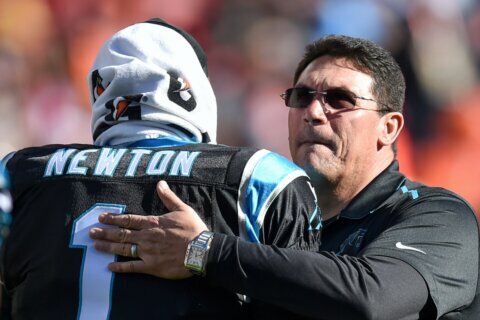