After 1 year of ‘Washington Football,’ fans weigh in on new name

One year after the Burgundy and Gold took on the decidedly bland moniker of “Washington Football Team,” WTOP checked in with a few fans to see what they want the new name to be.
Listen now to WTOP News WTOP.com | Alexa | Google Home | WTOP App | 103.5 FM

July marks one year since the suits running the Burgundy and Gold adopted the decidedly bland moniker of Washington Football Team — shortly after they dropped the name Redskins.

While it’s spot-on in terms of accuracy, “Washington Football Team” doesn’t necessarily roll off the tongue — making things awkward for fans at the bar, announcers in the booth and backslappers in the studio.

But ever since the name was adopted, it was with the understanding that someday in the near future, a new team name would be announced.

This is no small deal. Think about it: If the name, logos and such are, well, cool, then they’re better assured healthy sales of jerseys, hats, hoodies and other overpriced merchandise. (Don’t @ me, NFL.)

And a cool branding identity encourages deep-pocketed corporations to want their brand displayed inside the stadium, on programs, around town etc. There’s a lot of money on the line here. And more money means, in part, keeping talent and, ideally, winning playoff games. And that, of course, is what fans really care about in the long run.

So where are fans when it comes to a name? Let’s just say there’s a diversity of thought.

Many in the Facebook peanut gallery, for instance, want the name reverted to the original. Others suggested sticking with “Washington Football Team.” One person thought “the Philadelphia Eagles” would work well. And a few offered the unusual suggestion of “Who Cares.”

So there’s that. Take from it what you will.

A few other fans stated their cases via email.

Curt, for instance, likes “Washington Phoenix.” As he explains it: “Color scheme works. We blend the colors like the [Los Angeles] Rams and you definitely get fire. … And the history of this team is pretty well [you] know. So ‘rise from the ashes’ seems apropos.“

Joshua Smith loves “Washington Redwolves,” in part because it recognizes an endangered species.

Daniel Hopkins wants to see the somewhat-similar “Washington Wolves.” He’s so passionate about it, in fact, that he’s written a manifesto laying out his case. He told WTOP the wolf’s place in Native American mythology, in part, makes it a good choice.

“[The team] could use that as a way to say, ‘Our name didn’t die. It evolved,’” said Hopkins, who added he doesn’t want “any variation of ‘Washington Football Team.’”

But WTOP evening anchor Dimitri Sotis — a WFT superfan — would love to see just that. “‘Washington Football Club’ or ‘Team’ stands out from the rest of the NFL,” he said. “To my taste anyway, it’s classy. It’s sophisticated.”

And while he’d rather see a name without “red” in it, one exception is the “Redtails,” which of course was a nickname for the Tuskegee Airmen.

“I could never turn away from that,” Sotis said. “In fact, I would say what a great educational opportunity, to be able to explain to young people who the Redtails were and what they did.”

And then there is Martin McCaulay, who holds the trademark for “Wolves,” as well as such names as “Warriors,” “Federals” and “Monuments,” among others. He tells WTOP he likes “’the Washington Pandas’ or some panda variant.” (And yes, “Washington Pandas” is one of the names he has trademarked.)

The team itself says it has been working on a name with the New York-based creative agency Code and Theory.

“We are now down to a shortlist of final names based on our strategic approach, research process, and insight phase,” team president Jason Wright wrote on Monday, adding that “Warriors” is now off the table. The Washington Post reported Saturday that the new name and logo will be unveiled early next year.

And if it seems like the team is dragging its feet on this, please note that the team involved fans on the renaming early on, and has been sorting through thousands of ideas.

“The team received over 5,000 submissions within the first week and continues to receive thousands of submissions a month!” it states on its special renaming section, where some choice names — with uniform designs and such — are showcased.

The team tipped its hand, somewhat, back in April, when season ticket holders were surveyed on such names as “Redwolves” and “Redhogs” — as well as “Washington DC Football Club” (a.k.a. “DCFC”), “Pilots” and (me-OW) “Demon Cats.”

Days later, Wright assured fans that “the survey is not meant to be a vote — or a meaningless exercise.” Rather, “it’s an important step in our efforts to collect feedback on the types of names put forward by our fans and those we hope to bring into the family.”

One thing that won’t change, the team said, is the burgundy-and-gold color scheme — something most fans will no doubt welcome. 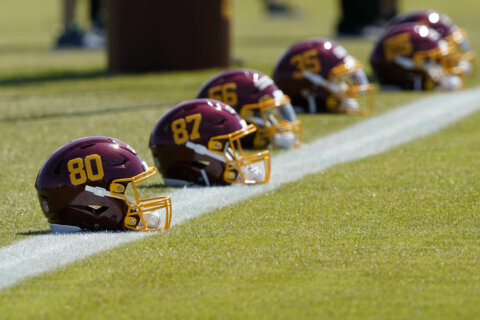 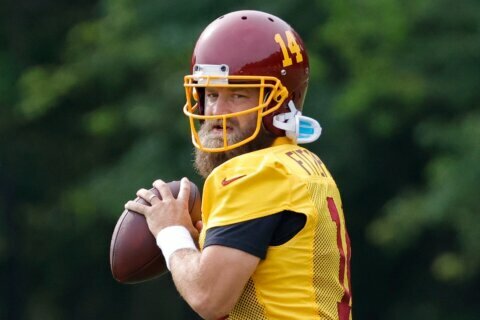 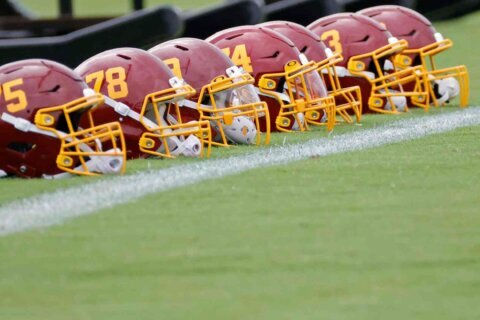