Commanders Pressing Questions: Will Carson Wentz be Washington’s starter in 2023?

Will Carson Wentz be the Commanders' starter in 2023? originally appeared on NBC Sports Washington

With training camp just around the corner, NBC Sports Washington’s Pete Hailey and Ethan Cadeaux will come up with, and then respond to, some burning questions facing the 2022 Washington Commanders.

Next up: Will Carson Wentz be the Commanders’ starting quarterback in 2023?

Now in Washington, Carson Wentz is with his third organization in as many seasons. That certainly can be viewed as a concern, especially when considering how messy the quarterback’s tenures ended in Philadelphia and Indianapolis.

With all that being said, Wentz arrives in Washington with a skill set and arm talent the Commanders haven’t had in years. And, after starting eight different quarterbacks over the past three seasons, the Burgundy and Gold are desperate to have stability at the sport’s most important position.

That’s why, barring a catastrophic disappointment this fall, I believe Wentz will be Washington’s QB1 in 2023 and beyond.

Wentz impressed both his teammates and coaches throughout minicamp and OTAs. No, he wasn’t perfect — he made his fair share of errant throws during the days media was allowed to be present. But the good plays certainly outweighed the bad ones, as Washington’s new quarterback far outperformed the fellow signal-callers on the Commanders’ roster.

There’s also a real argument that the 2022 Commanders have more to offer at the offensive skill positions than Wentz has ever seen before.

Terry McLaurin will unquestionably be the best receiver Wentz has ever thrown to. During the offseason program, Wentz already started to form a promising connection with rookie Jahan Dotson. Throw in Curtis Samuel, Logan Thomas and Washington’s talented trio of running backs (Antonio Gibson, J.D. McKissic and Brian Robinson Jr.) and Wentz has a ton to work with.

The Commanders enter 2022 tied with Dallas for the league’s easiest schedule based on 2021 record. Washington plays four of the six worst defenses from a season ago, too. Based on the schedule alone, Wentz and the Commanders’ offense should have plenty of favorable matchups throughout the 2022 campaign.

Wentz is technically under contract through the 2024 season, but the quarterback has no guaranteed money on his deal after this season. Washington could cut Wentz after 2022 and have no dead cap hit. There’s a ton of pressure on Wentz to perform because his future is not guaranteed past this fall.

That being said, the best-case scenario for both sides is for Wentz to succeed. Ron Rivera said during the QB’s introductory press conference he hopes this partnership lasts for years. The head coach and his staff expect to take a jump beginning in September. Whether that happens will largely fall on No. 11’s shoulders. I believe Wentz will step up to the plate.

I, too, envision Wentz continuing on as the squad’s starter in 2023, because he’s going to be very superior to his recent predecessors, because his peers on his side of the ball seem poised to help him out and because (hopefully) he realizes, and cares about, just how much this fall and winter could impact the rest of his NFL career.

But I don’t necessarily feel comfortable with acting like this is going to be a slam dunk. Instead, I bet it’ll be more like a floater that hangs out on the rim for a second or two before tumbling through. And I’m definitely not using the phrase “and beyond” after 2023.

While Wentz’s initial play and quotes with the Commanders have been encouraging, which Ethan outlined above, I can’t keep myself from saying, “If he really was this impressive and this mature, he wouldn’t even be here.” Every time I want to get excited about the guy, I circle back to that line.

Clearly, his numbers must be hiding something about his play and/or he’s a different way in the locker room and on the field than he is when standing behind the microphone. Two different teams had him installed as their top passer, and both of them cut ties with him the moment they could.

Yes, he’s going to be of tremendous service to McLaurin, he seems enamored with Dotson, he’ll be able to stand in the pocket and see over pass rushers on key downs and there will be matchups where he is easily the best QB with a helmet on.

But I also doubt his ability to really lead Washington to a markedly better record simply because there must be some flaws that just haven’t revealed themselves yet but will in due time.

However, Rivera and Co. don’t necessarily need a markedly better record. For them, going from seven wins to nine or 10 would represent progress, and sure, I wouldn’t be surprised at all if Wentz assists in that mission. When he’s back in 2023, though, I don’t anticipate many being overly thrilled with his return. 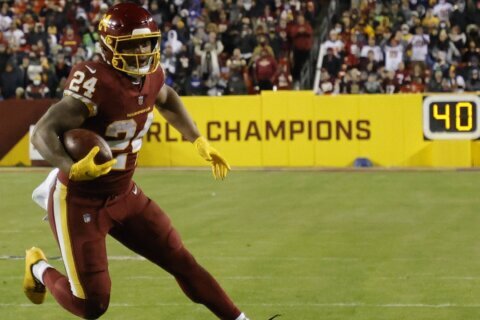 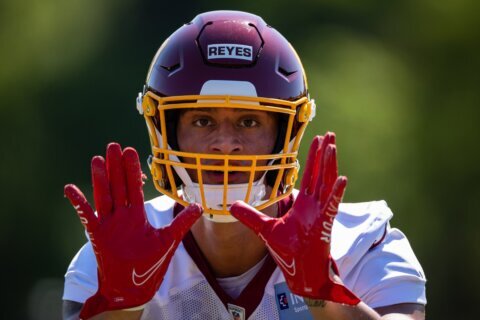