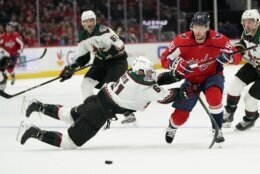 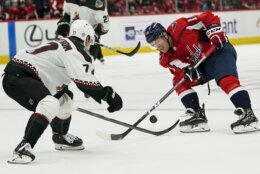 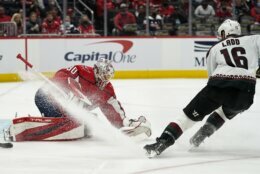 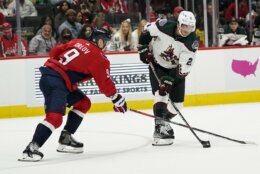 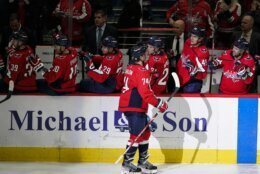 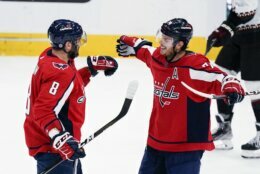 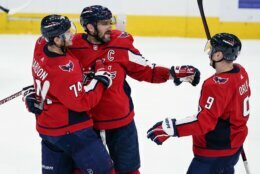 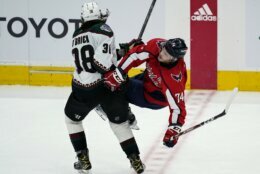 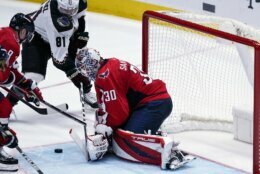 Carlson’s goal with 7:58 left in the third period was the Capitals’ third in 25 opportunities on the power play dating to opening night. They came up empty on their first five power-play chances against Arizona before breaking through.

“You’re hammering away all night, you’re trying to find a goal,” coach Peter Laviolette said. “You’re trying to make it happen. It’s easy to get frustrated and start derailing, and I thought that we stayed with it and got a big goal at the end.”

Washington outshot the Arizona 32-16 but struggled to create quality scoring chances, let alone score, on rookie goaltender Karel Vejmelka before Carlson’s shot deflected in off a penalty-killer. Vejmelka, a 25-year-old from the Czech Republic, finished with 30 saves, including a few notable stops at even strength to give the Coyotes a puncher’s chance at their first victory of the season.

“‘Vej’ was rock solid,” first-year Coyotes coach Andre Tourigny said. “He was really solid, and he gave us the hope all the time. We were one shot away and we knew ‘Vej’ would be tough to beat.”

Still, the Capitals skated circles around their overmatched opponent, and eventually the talent disparity came through. Ovechkin’s goal in the final minute was his league-leading ninth of the season and 739th of his career, two shy of Brett Hull for fourth on the all-time list.

The 36-year-old Ovechkin also tied reigning MVP Connor McDavid for the most points in the NHL at 15 apiece.

“We’re not too shocked by it, but it’s pretty cool to see,” Capitals defenseman Justin Schultz said of Ovechkin. “I don’t think he’s going to slow down at all.”

“It was a good month,” Schultz said. “Obviously not losing in regulation, it’s nice. It’s a good start for us.”

Rebuilding Arizona fell to 0-8-1 and remained last in the league standings with one point. With 2018 Stanley Cup-winning fan favorite Jay Beagle returning to town, the Coyotes put quite the scare into the Capitals before falling short.

“Got to give Arizona credit too because they played last night and they competed hard out there and competed for ice,” Laviolette said. “It came down to the third period having to find a goal.”

Making his third start of the season, Ilya Samsonov stopped all 16 shots he faced to pick up the fourth shutout of his NHL career.

“It was a little bit hard for me because hard to keep concentration,” Samsonov said. “A hard win today, but we all feel happy.”

NOTES: Washington’s Evgeny Kuznetsov picked up his sixth and seventh assists of the season to tie Tom Wilson for the team lead. … Carlson assisted on Ovechkin’s goal to give him a two-point game. … Brett Leason made his NHL debut for the Capitals in the absence of Nic Dowd, who aggravated a lower-body injury at the morning skate. … With Leason in, Washington dressed a lineup with four rookies for the first time since April 7, 2018. … Former Capitals prospect Travis Boyd was a healthy scratch for Arizona to make room for veteran Swede Loui Eriksson.

Coyotes: Visit the Carolina Hurricanes on Sunday afternoon for stop No. 4 of their six-game road trip, still looking to give Tourigny his first NHL victory. 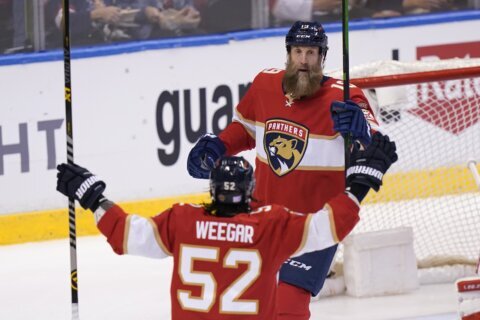 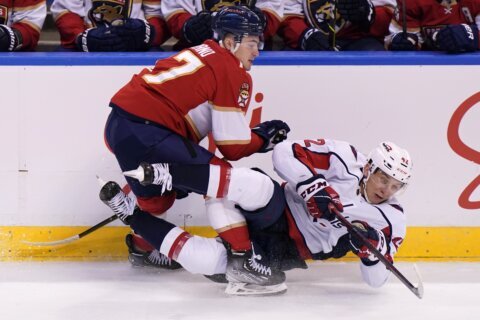