Guentzel wins it in OT as Pens, Caps clinch playoffs

Jake Guentzel scored his 22nd goal 2:11 into overtime to lift the Pittsburgh Penguins to a 5-4 victory over the Washington Capitals on Thursday night in a result that clinched both teams' place in the playoffs.
Listen now to WTOP News WTOP.com | Alexa | Google Home | WTOP App | 103.5 FM
(1/8) 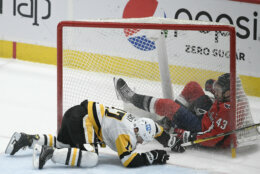 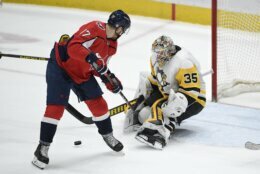 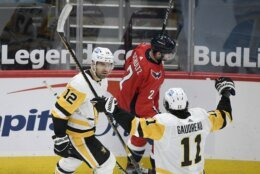 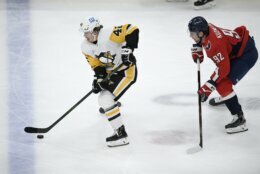 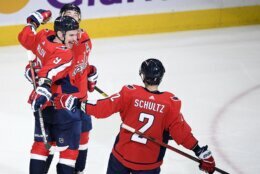 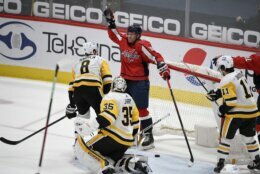 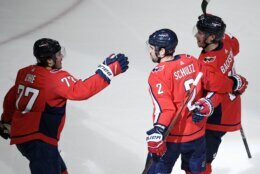 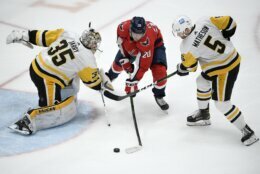 WASHINGTON (AP) — Jake Guentzel scored his 22nd goal 2:11 into overtime to lift the Pittsburgh Penguins to a 5-4 victory over the Washington Capitals on Thursday night in a result that clinched both teams’ place in the playoffs.

The result, combined with the New York Islanders’ regulation win over the New York Rangers, ensures both teams will be among the Eastern Division’s four playoff teams.

“We’re going to enjoy this one tonight,” Penguins coach Mike Sullivan said. “By no means are any of us satisfied — we understand there’s a lot of work to do here. But we’re going to take a deep breath tonight and enjoy it.”

Kasperi Kapanen scored his ninth and 10th goals of the season, Frederick Gaudreau added a goal in his return from injury and Zach Aston-Reese also scored for the Penguins, who have now won five of their seven meetings with the Capitals.

Colton Sceviour and Jared McCann each had two assists for Pittsburgh.

Nicklas Backstrom had three assists and Justin Schultz had two for the Capitals, who would not have clinched their spot with a loss in regulation.

“I think we shot ourselves in the foot a couple times, just with the puck, and it ended up in the back of the net,” Washington coach Peter Laviolette said. “I thought we were able to get some looks, and I thought we were pretty good defensively. But the mistakes that we made, they cost us.”

Kapanen gave his team the lead midway through the third. McCann spotted him breaking down the right with a cross-ice pass, and with his defender beat, Kapanen lifted a shot over Vanecek’s blocker side into the top right corner to make it 4-3.

Wilson leveled it on a 6-on-5. Evgeny Kuznetsov tracked down his own miss, then spun and snuck a tight feed to him in front of the crease, and Wilson lifted a shot over Jarry’s shoulder.

“It’s never good when you give up a goal like that within the last, how many seconds there,” Guentzel said. “But you’ve just got to look at it (as), you’ve got a point, and you’ve got to try to get the next one. You’ve got to move by it pretty quick.”

Penguins: RW Evan Rodrigues had to be helped off the ice midway through the first period after he was caught in the lower left leg by teammate Mike Matheson’s shot attempt. … Evgeny Malkin (lower body) participated in Pittsburgh’s morning skate but remained out. … Gaudreau (lower body) returned after missing seven games.

Of the Penguins’ five wins in the season series, this was the fourth via overtime or shootout. Afterward, both sides said Thursday’s contest had a postseason feel.

“I think these last couple games have been playoff-style hockey,” Guentzel said. “There might not be as much ice out there and it’s just two teams who are defending hard.”

Said Laviolette: “I know that when we play them, we’re planning to play a certain way. It has to be in order for us to find success. I’d imagine they’d probably say the same things. It’s just one of those games where there’s not a lot of room. You have to compete for everything.”

Oshie’s goal on a first-period power play snapped a stretch of nine successful Pittsburgh penalty kills against Washington, the NHL’s second-best club on the man advantage.

Meanwhile, Kapanen’s tying goal later in the period was the first allowed at even strength by a Capitals goaltender since the second period of a 6-3 loss to Boston on April 18, a stretch of 222 minutes and 42 seconds.

The Penguins and Capitals meet again in Washington Saturday, completing their season series.