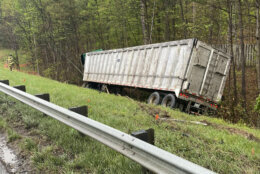 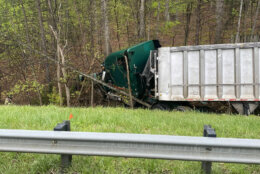 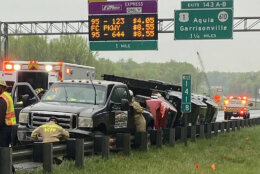 A crash late Monday morning involving two trucks, a car carrier and a trash hauler, jammed traffic on Interstate 95 out of Fredericksburg, Virginia, leading to an 11-mile backup.

Traffic was backed up on northbound I-95  Virginia State Route 630 and before 610 Garrisonville Road, according to the WTOP Traffic Center. The crash cleanup initially had one lane closed, causing traffic to crawl through the area. Shortly after 1 p.m., all lanes had reopened and the cones were moved to the shoulder.

However, drivers should still expect delays on I-95 heading northbound.

Photos shared on Twitter by the Stafford County Sheriff’s Office showed the trash hauler had crashed off the roadway and into a nearby woods. The crash happened near the 142 mile-marker.

The sheriff’s office said the trucks’ occupants are being treated for injuries that were not believed to be life-threatening.

The WTOP Traffic Center said drivers attempting to navigate around the crash can try U.S. Route 1 instead.

“Beware, that you’ll see some volume heading toward the Rappahannock and again trying to head past Hospital Center Boulevard to get past the area,” WTOP Traffic Reporter Reada Kessler said.

Officials: Va. inmate killed in cell by another inmate