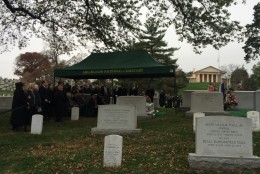 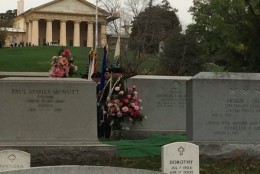 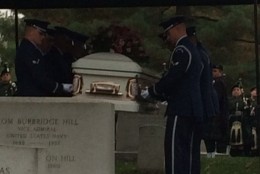 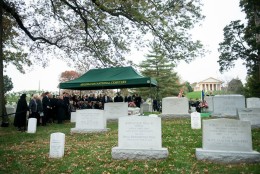 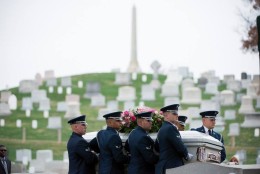 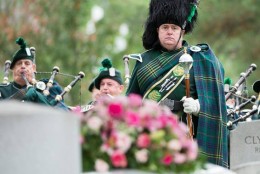 ARLINGTON, Va. — “In honor of Maureen O’Hara, our very own,” barked the pipe major as the 45-member Shannon Rovers Irish Pipe Band of Chicago struck up the strains of “Garryowen” at the grave site, in a final salute to the famed Hollywood actress.

O’Hara, who died Oct. 24 at age 95, was laid to rest alongside her husband, retired Air Force Brigadier General Charles Blair.

A U.S. Air Force honor guard bore her remains to the grave situated on a shaded bluff, not far from Arlington House — the Lee Mansion.

O’Hara’s family and friends gathered under a slate-gray autumn sky as the Rev. Gerald Weymes, of St. Timothy Church, in Chantilly, Virginia, officiated at the simple graveside ceremony.

Maureen O’Hara was a mainstay during Hollywood’s golden age, appearing in films including “How Green Was My Valley,” “The Quiet Man” and “Miracle on 34th Street.”

She became eligible for burial at Arlington because of her husband, a veteran Navy aviator and retired Air Force brigadier general who died in 1978.

Blair was one of the nation’s foremost aviators. He made the first fighter jet crossing of the North Pole in 1959.

The wait for interment at Arlington can be long — sometimes months — depending on the time of year. Spring and summer are the busiest times.

But cemetery officials say the current wait is two weeks for the casketed remains of dependents without military honors.