At SXSW, Va.-based Cortina brings history to the present

AUSTIN, Texas — Through a host of new TV shows, time travel has emerged as one of the hottest new subgenres within the realm of science fiction. 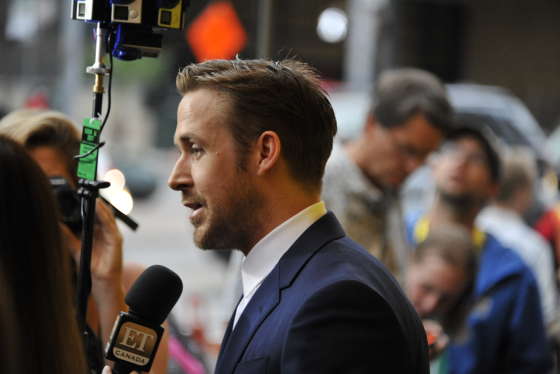 Celebrities bring out the crowds at South by Southwest

If you play your cards correctly — and know precisely where to look — you will find that South by Southwest offers a veritable feeding frenzy for celebrity sighting.

NBC’s “Timeless,” ABC’s “Time After Time” and Fox’s “Making History” have viewers follow each program’s characters’ time-traveling adventures. While that premise is certainly fun to watch — until a real-life Dr. Emmett Brown actually invents the flux capacitor — the ability to travel back (or even forward) through the years to affect humanity’s timeline remains the pure domain of entertainment.

But thanks to the magic of McLean, Virginia-based Cortina Productions, the ability to witness history in three dimensions has arrived. The company recently showcased their work at the LBJ Presidential Library and the Bullock Texas State History Museum as an adjunct to the South by Southwest Interactive Festival in Austin, Texas.

Cortina is a full-service design and production company specializing in enhanced location-based multimedia experiences for museums and other cultural institutions. In Austin, its two highly innovative museum demonstrations deployed the wizardry and wonder of augmented reality.

“We’ve taken a passive display and overlaid holographic imagery that essentially sits on top of a static museum display and brings an actual artifact — essentially an uncovered relic — out from the past into today,” said Jim Cortina, principal and director of development at Cortina. 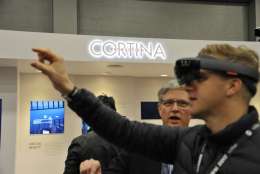 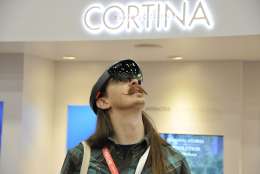 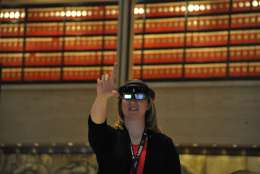 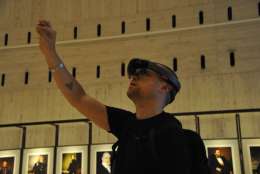 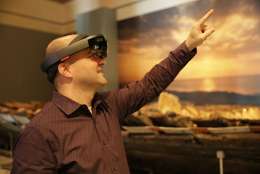 “At the LBJ Library, we wanted to connect visitors to President Johnson’s archives collection with its millions of documents that outline the administration and bring it to life,” said Amy Maddox, fellow Cortina principal and the driving force behind the library project.

“Visitors use the HoloLens and look up at this spectacular collection of the archive. We’re focused specifically on the Arab-Israeli War of 1967,” she added. “They see the graphics of six days out in front of them, they pinch on a day and the documents come down in front of them. On those documents, they hear from the president, his counsel and read a memo. They can also walk around the documents, look at the photos and get a glimpse into what was happening for these six days in his presidency.”

The Texas State History Museum exhibit journeyed even further back in time to restore a recovered 17th century shipwreck to its former glory. The flagship of French explorer Robert LaSalle’s vessels, LaBelle, sunk in Matagorda Bay in 1685. Discovered in 1995 and later excavated, the hull now sits within its own exhibit space at the museum. But when viewed through the HoloLens, the holographic imagery brings the entire 300-ton, 54-foot-long vessel to life in its full-scale entirety, despite the fact that the existing hull of the ship constitutes the craft’s only excavated remains.

“The reception has been phenomenal,” Cortina said, adding, “While it was great for visitors to the Presidential Library and the Texas State History Museum to see these demonstrations under optimal conditions, it’s unfortunate that we could not import both exhibits to the South by Southwest trade show floor, to share the experience with thousands.”

Several hundred show patrons made the trek from the Austin Convention Center to both the library and the museum, less than two miles away. But those who only visited Cortina at their Interactive Trade Show booth were treated to a handful of powerful examples of the interactive displays the company has created for hundreds of museums across the globe.

Through a head-mounted VR display, users stepped into a virtual shark tank to interact with schools of fish, stingrays and a humpback whale, and they could even feed a great white shark.

Other on-site displays included a demo from the New England Patriots Super Bowl exhibit featured at their Foxboro headquarters, “Personal Stories of the Revolution” from the American Revolution Museum at Yorktown and Barney’s White House from the George W. Bush Presidential Library, among others.

Closer to the District, Cortina’s creations can be found at notable venues such as Mt. Vernon, the Library of Congress, the Newseum, the U.S. Holocaust Memorial and several Smithsonian Institution museums, including the National Museum of African American History & Culture. 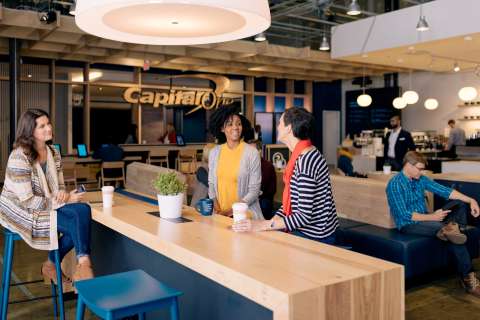 South by Southwest: Banking, coffee combo brews at Capital One