PHILADELPHIA (AP) — Brandon Marsh knows his way around a cold one after not one or two — but four!…
Listen now to WTOP News WTOP.com | Alexa | Google Home | WTOP App | 103.5 FM

PHILADELPHIA (AP) — Brandon Marsh knows his way around a cold one after not one or two — but four! — Phillies clubhouse celebrations on their way to the World Series.

So when the 25-year-old outfielder found himself on the big screen this week at a Flyers game, Marsh obliged fans by slamming his beer to a roaring ovation. Soaking in the experience with a smile two seats to Marsh’s right, Phillies manager Rob Thomson.

All the Phillies have to worry about now is the hangover.

No, not from a night out at a hockey game, but a possible malaise after a season of success,

Thomson, who starts his first full season as manager, doesn’t fear a lack of focus. While making the World Series was awesome, it won’t top the thrill of winning one.

“They have fun but they don’t mess around,” Thomson said. “They act like professionals.”

The Phillies likely will not have NL Championship Series MVP Bryce Harper until around the All-Star break following surgery on his right elbow in late November. The 30-year-old Harper sustained a small ulnar collateral ligament tear in his elbow in April. Even with the elbow injury, Harper led the Phillies to their first World Series since 2009, where they lost in six games to Houston. He hit .349 with six homers and 13 RBIs in 17 postseason games.

“Just more strengthening than anything, no functional workouts,” Thomson said on Wednesday.

Good thing the Phillies had a Plan B.

Among a flurry of moves this offseason that included acquiring two-time All-Star Gregory Soto and eight-time All-Star Craig Kimbrel to strengthen the bullpen, there was no bigger splash than adding Trea Turner. The Phillies signed the star shortstop to a $300 million, 11-year contract. Turner hit .298 with 21 homers and a career-high 100 RBIs last year in his only full season with the Los Angeles Dodgers.

“I think he’s going to fit right in with this clubhouse,” Thomson said. “He can do everything on the field.”

Turner, though, will have his first spring training with the Phillies interrupted because of the World Baseball Classic. While rosters aren’t set, Gold Glove catcher J.T. Realmuto and NL home run champion Kyle Schwarber have said they would play in the international tournament. Pitchers Ranger Suárez, José Alvarado and Seranthony Dominguez want to join up with their countries, as does backup catcher Garrett Stubbs and starter Taijuan Walker.

The interruptions will come during a spring training in which teams adjust to a pitch clock and limits on defensive shifts. Thomson said he was worried most about the pitch clock.

“Just because a lot of guys aren’t used to it,” Thomson said. “There are going to be some frustrating times. So I’m glad that right from the first game of spring training we’re going to use it so they can get comfortable with it and get their body clock accustomed to it.”

Thomson said he would send out rules reminders next week to the team next week.

“I hate frustration,” Thomson said. “It takes away from people getting locked in and performing at the highest level.”

The Phillies won only 87 games in a loaded NL East before they ripped through the Cardinals, Braves and Padres in the postseason. The Mets won 101 games and added three-time Cy Young Award winner Justin Verlander, and the Braves won 101 games and have a young nucleus locked in to long-term deals.

“And you can never discount Miami,” Thomson added.

Just how good of an offseason was it for Thomson? According to one poll, he was ranked No. 2 among the most handsome managers in baseball.

“I told my wife, I said hey listen, Michelle, you know lucky you are? I’m the second-most handsome manager in baseball,” Thomson said, laughing. “And she was cooking dinner, and she didn’t miss a beat and she turned around and she said, ‘so everybody else must be tied for first.’”

Thomson, Marsh and utility player Dalton Guthrie are on an offseason barnstorming tour throughout the state and pitched in for volunteer work and they visited youth baseball teams. Thomson has one more out-of-state stop on his agenda: The former Kansas Jayhawks baseball star is giving a pep talk to the team Friday before he takes in the second-ranked basketball team’s game against Kentucky on Saturday at Allen Fieldhouse.

On a windy day at Citizens Bank Park, the memories of last season were there with World Series signage still on the walls and on top of the dugout. But there was a look ahead toward opening day in the form of a 76-feet high and 97-feet wide scoreboard that puts the jumbo in jumbotron under construction like a baseball Death Star out in left field.

It will be ready for the start of the season, when it’s finally all about 2023.

And, Thomson insisted, no pressure.

“I don’t feel it because I think we’ve got a good ballclub,” Thomson said. “I think if we stay healthy and we do what we’re supposed to do, I think the results will be there.” 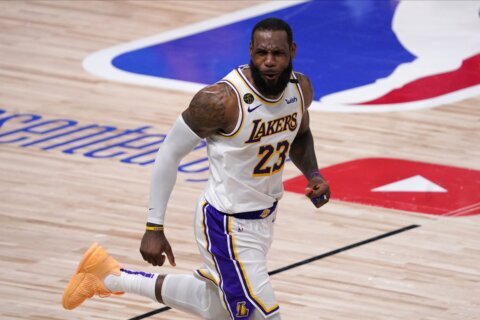