SAN DIEGO (AP) — Jaelen House scored 29 points, including three clutch 3-pointers down the stretch, and Jamal Mashburn Jr. had 22 for New Mexico, which used a 12-0 run to take control in beating No. 23 San Diego State 76-67 on Saturday night.

House, who played better the more he was booed by the crowd, had 10 points during the 12-0 run that gave the Lobos a 60-49 lead, and 13 points in a span of about three minutes. He scored 21 in the second half.

House was whistled for a technical with about five minutes to go for staring at the crowd.

“We weren’t hungry these past few games and I feel like we came out hungry tonight,” House said.

Morris Udeze had 10 points and 15 rebounds, and Javonte Johnson had 10 points for the Lobos (16-2, 3-2 Mountain West). The Lobos fell out of The Associated Press Top 25 after two losses last week while the Aztecs jumped back into the poll.

The Lobos “were ready to go,” coach Richard Pitino said. “They were juiced up for this game.”

SDSU was leading 49-48 when 6-foot-10 Nathan Mensah, the reigning MWC Defensive Player of the Year, was whistled for his fourth foul, and then hit with a technical foul for reacting angrily and appearing to make a move toward a referee before a teammate stepped in. House made both free throws and then hit a 3-pointer for a five-point possession and a 53-49 Lobos lead.

Mashburn made a jumper and House made a 3-pointer and another jumper for a 60-49 lead with 6:01 to go. SDSU’s Micah Parrish made one of two free throws to end New Mexico’s run before House made another 3-pointer for a 63-50 lead.

Mensah fouling out changed the tone of the second half.

“I’d say that was a big part because he’s a big body down there and he’s affecting shots,” House said. “They don’t really have a backup that’s doing the same things he’s doing.”

The Aztecs scored five straight points after House was called for a technical but it wasn’t nearly enough.

“We’ve both got learning experiences in our locker room. Celebrate after the game,” Pitino said. “House was terrific, but sometimes you’ve just got to like stun gun him a little bit and slow him down. But he was so good. Those refs, when you celebrate like that, they’re going to get you.”

The Aztecs pulled within four points before Udeze scored inside. Mashburn hit a jumper and two free throws in the final 1:20.

Mashburn and Udeze led the Lobos to a 38-28 halftime lead before the Aztecs tightened their defense and caught up seven minutes into the second half. Keshad Johnson scored six points for the Aztecs early in the second half and Parrish’s putback tied it at 45.

The Lobos twice led by 11 points in the first half.

New Mexico: The Lobos had been the last undefeated team in the nation before losing at Fresno State on Jan. 3. They’re 2-1 since.

San Diego State: The Aztecs went from having perhaps their best first half of the season in a 74-65 win against Nevada on Tuesday night to having one of their worst. The Aztecs allowed the Lobos to shoot 48.5% while making only 37.5% of their shots in the first 20 minutes. The Aztecs made just one of seven free throws. 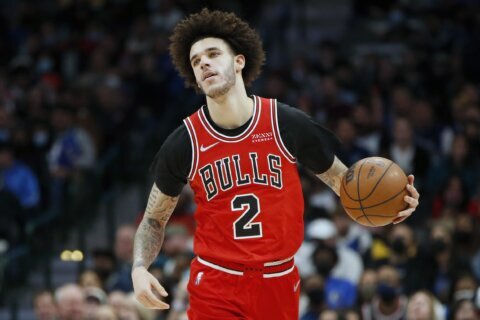 Analysis: It may be time to re-think NBA All-Star voting