SALT LAKE CITY (AP) — Malik Beasley made five 3-pointers and scored 21 points, and the Utah Jazz cooled off Zion Williamson and the New Orleans Pelicans with a 121-100 victory on Tuesday night.

Williamson scored 26 points in 26 minutes and Jonas Valanciunas scored 15, but the Pelicans’ seven-game winning streak was snapped. Only one of those wins came on the road, where New Orleans is 6-6.

After missing three games with an illness, Utah’s Lauri Markkanen showed little rust in scoring 19 points, and Nickeil Alexander-Walker also scored 19 and had a season-high six assists for the Jazz.

“You don’t want to beat yourself when a team’s already so good. You want to make it as small a game as possible. You do that by rebounding, deflecting balls, making an extra pass and getting back on defense — just playing with extra effort,” Alexander-Walker said.

The Pelicans moved to the top of the Western Conference by creating havoc, but this time it was the Jazz that had New Orleans making poor decisions, taking uncomfortable outside shots and forcing off-balance drives to the basket.

“We got to step on the court and step on the floor and understand that teams are gonna come after us, just like we go after teams,” New Orleans coach Willie Green said. “We didn’t execute on both ends of the floor. Give them credit. They just kicked our butts.”

Walker Kessler was one key to the disruption with 11 points, a career-high 16 rebounds and three blocked shots. Another scrapper for the Jazz was Jarred Vanderbilt, who had season bests of 18 points and 14 rebounds. Utah had a 59-43 rebounding advantage and 19 offensive boad.

“Just all five getting in a fight, putting our body on somebody. Having that mentality to go in there and hit somebody and grab rebounds. I feel like we did a great job with that collectively,” Vanderbilt said.

The Jazz scored the final eight points of the third quarter, capped by Jordan Clarkson’s 3-pointer at the buzzer to make it 91-71. The Jazz led by as many as 27 points before the primary rotation players went to the bench.

Williamson, who has averaged 31.3 points over last four games, was nearly unstoppable as he bullied his way to the basket, but no one could make perimeter shots when he kicked it out.

“If we can get him to kick the ball out, we can contest the 3. We are more worried about Zion killing us in the paint than we are about them shooting well from 3,” Kessler said.

Williamson is scoring a league-high 22 points per game in the paint but played just 11 minutes in the first half because of foul trouble. The Pelicans never recovered the lead they lost when he left the game.

Only Chicago and Atlanta shoot fewer 3s than the Pelicans, but the Jazz dared them to shoot by clogging the paint. New Orleans finished 4 of 27 from beyond the arc and shot 39.8% overall.

“To have six guys in double figures and 31 assists shows that we played together on the offensive end,” Utah coach Will Hardy said. “But what stood out to me was how connected we were on the defensive end. That’s our best defensive game for the season as a team.”

Williamson played limited minutes because of foul trouble and then was less aggressive to avoid picking up more fouls.

It got in his head and carried over into the second half.

Pelicans: Brandon Ingram (left toe) is still out. … Larry Nance Jr. got a technical in second quarter and had to be restrained from going after the officials. … The Pelicans forced 22 turnovers but gave up 26 points on 17 of their own giveaways.

Jazz: Collin Sexton (right hamstring) and Simone Fontecchio (left ankle) missed the game. … Utah matched its third-quarter season high with 39 points and held the Pelicans to 15 second-quarter points, the fewest the Jazz have allowed in that period this season. .. The Jazz are 12-6 when Markkanen and Mike Conley are in the starting lineup together. This was the first such game since Nov. 19.

The teams play at Utah again on Thursday. 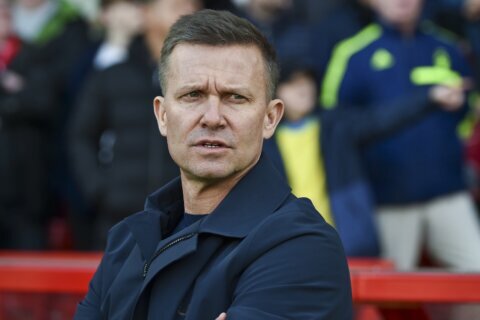