WINNIPEG, Manitoba (AP) — Blake Wheeler had three goals and an assist, Connor Hellebuyck made 40 saves and the Winnipeg Jets routed the Colorado Avalanche 5-0 on Tuesday night.

“No, it’s not just another game,” Jets coach Rick Bowness said. “I think the message we’re trying to send here is make them worry about us. They’re the defending Stanley Cup champions. They’re a great hockey team.

“We’re starting to realize that when we play the right way, and we play the way we’re supposed to play, and play together, we’re a very good hockey club. The message is more about us and the way we want to play.”

Mark Scheifele added a goal and two assists, and Josh Morrissey had a goal and an assist. Cole Perfetti contributed three assists for the Jets (14-6-1).

Hellebuyck’s third shutout of the season and 31st of his career began a four-game homestand at Canada Life Centre, where the Jets are 8-2-0.

“I thought we played a really good game. The details were right,” Hellebuyck said. “I think we improved throughout the game and we really stuck to our game and we were patient. So, I mean, a lot of the things we wanted to do, we did.”

Wheeler’s fourth career hat trick was his first since scoring four goals in a 5-2 win over Columbus on March 3, 2019.

“We’ve liked the way we’ve played,” Wheeler said. “A little sluggish in the first period coming off the road, but kind of to be expected. We just want to continue to build our game and to perform obviously at home in front of our fans. Tonight was a good step in that direction.”

Alexandar Georgiev stopped 18 shots for Colorado (12-7-1), which opened a four-game trip. It was the second time this season the Avalanche were shut out.

“We had some hard-working guys, but when you’re a short, depleted roster you can’t have any passengers and we just had too many of them tonight,” Colorado coach Jared Bednar said.

Winnipeg led 1-0 after the first period and 3-0 following the second.

Wheeler opened the scoring at 9:18 of the first, beating Georgiev stick side 20 seconds into a power play.

Scheifele appeared to score at 2:05 of the second, but Colorado challenged for goaltender interference by Wheeler and the goal was nixed.

Less than two minutes later, Morrissey fired a point shot through traffic to make it 2-0.

Wheeler scored his sixth of the season at 13:07, taking advantage of a pass from Perfetti that put Georgiev out of position.

Through two periods, Colorado was outshooting the Jets 25-14.

“We obviously didn’t get enough traffic (to the front of the net),” Avalanche forward Andrew Cogliano said. “Some pucks were laying there and we weren’t doing a good enough job getting there.”

Scheifele got his 12th after a quick pass across the front of the crease from Kyle Connor at 1:22 of the third.

Wheeler completed the hat trick with 3:51 remaining when Perfetti sent him a pass in the high slot.

Morrissey, who’s been jokingly called Josh Norrissey by teammates in reference to the Norris Trophy that goes to the NHL’s top defenseman, extended his point streak to five games (four goals, five assists). He leads the Jets with 25 points in 21 games (five goals, 20 assists) and hasn’t gone consecutive games this season without a point.

Colorado forward Artturi Lehkonen had his career-high nine-game point streak snapped. He had four goals and seven assists during the run, which was the longest point streak on the team this season.

The Avalanche, the league’s top power-play team heading into the game, went 0 for 3 with the man advantage. That ended a run of eight straight games with a power-play goal.

Colorado: Plays at Buffalo on Thursday. 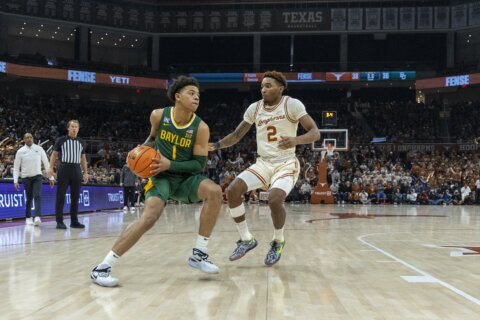