Sydney McLaughlin does it again, breaks own world record

McLaughlin flashed a broad smile when her time was announced, then gave a thumbs-up. She crossed the finish line at Hayward Field in 51.41 seconds, breaking her own record of 51.46 set last year at the Tokyo Games, where she won the gold medal.

“I mean it’s Track Town USA, what do you expect? she said afterward. “Every time I come here I can just feel something amazing is going to happen.”

Asked how she was going to celebrated afterward, McLaughlin joked: “Eating some real food besides vegetables. Like a cheeseburger or something, some pancakes.”

The top three finishers in each event at the national championships will represent the United States in the world outdoor championships, also at Eugene’s Hayward Field, next month. It is the first time that track and field’s biggest event outside of the Olympics will be held on American soil.

Dalilah Muhammad sat out of the race because of a slight injury, but she has already qualified for the world championships as the defending champion in the event. McLaughlin will also be joined on the U.S. team by runner-up Britton Wilson and third-place finisher Shamier Little.

Allyson Felix, the most decorated woman in track history, finished sixth in the 400, in what was her final national championship race.

Felix, who announced in April that this will be her final season, is enjoying the final days of her illustrious career — which includes 11 Olympic medals. She plans to run her final official race in her native Los Angeles in August. Despite her finish, Felix will is expected make the mixed relay team at worlds.

NCAA champion Talitha Diggs of Florida won the 400 in 50.22 seconds.

“It was a great field. So just wanted to make sure to maintain my form, engage my core and just push,” Diggs said.

Asked if she was disappointed with the finish, Felix laughed.

“Honestly no. You guys know the 400 is hard for me. It’s not my natural passion, it’s always just been something I challenged myself with,” she said.

Michael Norman ran the men’s 400 in a world-leading 43.56. He finished first at the Olympic trials last year and went on to place fifth in Tokyo.

Temperatures at Hayward Field on the University of Oregon campus soared to the low 90s. Events for Sunday, the meet’s final day, were moved up earlier in the day because of the heat.

Sprinter Sha’Carri Richardson made it through to the 200 final Sunday by finishing second in her heat.

Richardson, known for her ever-changing hair color and long nails, did not qualify for the 100 final, even though she was among the favorites after winning the event at the Olympic trials last year. Richardson did not make the U.S. team for Tokyo after she tested positive for marijuana following the race.

Richardson’s heat was marked by several late scratches, but she finished in 22.69 seconds. Kentucky’s Abby Steiner, who set a collegiate record in the 200 meters at the NCAA track and field championships, had the best time in the heats at 22.14.

On the men’s side Cooper Teare finished first in 3:45.86. Teare is also entered in the 5,000 on Sunday, the final day of the meet. Olympic silver medalist Chris Nilsen won the pole vault. Hillary Bor won the steeplechase by such a wide margin he pointed to the stands in celebration down the stretch. Daniel Haugh won the title in the hammer. 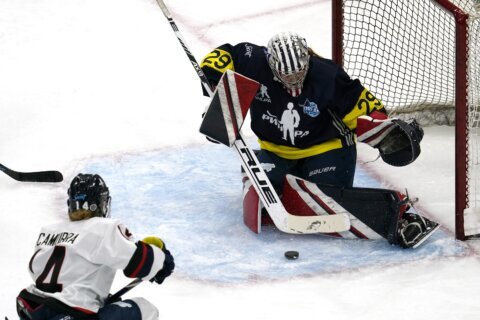