BRASELTON, Ga. (AP) — The checkered flag hasn’t waved just yet on major North American motorsports this season. There is still one star-powered, 10-hour race to go.

The IMSA sports car series wraps up its season Saturday with the Motul Petit Le Mans endurance race at Road Atlanta. Five championships will be decided on the sprawling 12-turn, 2.54-mile circuit, including a down-to-the-wire battle in the top DPi class between heavyweights Action Express Racing and Wayne Taylor Racing.

First up was Friday competition and Taylor Hagler became the first female hampion in the Michelin Pilot Challenge when her Bryan Herta Autosport team started the race. Christina Nielsen previously won a pair of championships in IMSA’s top-tier WeatherTech Championship, but Hagler is the first woman to win a title in the lower division.

“Being the first female champion is a little overwhelming… I feel like there’s going to be a lot of pressure,” Hagler said. “Growing up, I looked up to Christina Nielsen and I know how I looked up to her, and now I think people might look up to me that way.”

The main event begins Saturday with a stacked IMSA lineup of superstars recruited for the endurance race. Among those in the field: Indianapolis 500 winners Scott Dixon, Alexander Rossi, Simon Pagenaud, Juan Pablo Montoya and Helio Castroneves, the reigning and four-time winner.

Jimmie Johnson, the seven-time NASCAR champion who just concluded his rookie IndyCar season, has a final shot at a victory this year with the No. 48 Action Express entry fielded in conjunction with Hendrick Motorsports. Action Express is owned by NASCAR Chairman Jim France, who also owns IMSA, and it added the No. 48 with Hendrick personnel for endurance races this season.

The effort is spearheaded by Chad Knaus, who won seven championships with Johnson and is now Hendrick’s vice president of competition. The car finished second in the season-opening Rolex 24 at Daytona — a strong enough debut for the team to commit to the remaining three IMSA Endurance Cup races.

The No. 48 crossed the finish line third in March at the 12 Hours of Sebring, but a drive-time miscalculation dropped the team to last in class. The team was fifth at Watkins Glen in June.

Knaus watched Hendrick Motorsports win its 15th NASCAR title on Sunday from North Carolina, but now in Georgia wants to be on site for a win — either the first for the No. 48, co-driven by Kamui Kobayashi, Pagenaud and Johnson, or the championship for the No. 31 Whelen Engineering Cadillac.

Brazilian drivers Felipe Nasr and Pipo Derani have shared the No. 31 all season and trailed Wayne Taylor Racing since Ricky Taylor and Filipe Albuquerque won the season-opening Rolex 24 at Daytona. WTR has three victories this season and is joined by Rossi at Road Atlanta, but a win by Nasr and Derani at Long Beach in September pulled them within 19 points of the championship.

Action Express has added Mike Conway for Saturday’s race, which essentially could be winner-take-all for the highest finisher among the two cars.

Championships will also be awarded in the GTLM class and the No. 3 Corvette team will win its second straight with Jordan Taylor and Antonio Garcia when it starts the race. Ben Keating and Mikkel Jensen should also win just by starting in LMP2, but LMP3 and GTD both have tight races.

Saturday marks the final race for the GT Le Mans class, which will be replaced next year by GTD PRO — a class expected to bring additional manufacturers to IMSA in a competition between all-pro and factory-supported GT teams.

The LMDh category is not scheduled to begin until 2023 but the category has secured commitments from manufacturers, teams and drivers that has IMSA poised to enter a golden era of sports car competition.

When the flag falls just before midnight on Saturday, there will be only 77 days until the engines are fired again with the 60th Rolex 24 at Daytona — the unofficial North American motorsports opener. 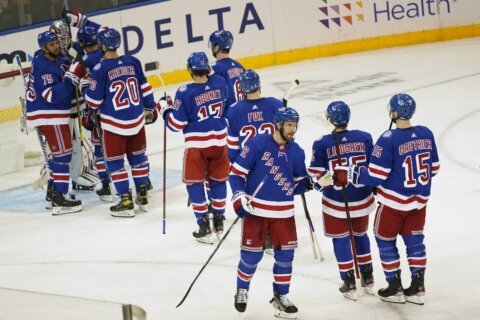