LEIPZIG, Germany (AP) — Players’ shouts echoed around an empty stadium for the first time this season in the Bundesliga as coronavirus-hit Leipzig lost 3-1 to Bayer Leverkusen on Sunday.

Moussa Diaby scored one goal and assisted another for Leverkusen in a game overshadowed by the virus.

“It’s empty, we hear our voices, and it’s not the same,” Leipzig forward André Silva told broadcaster DAZN. “We’ll never get used to it.”

All season, German fans have had to show proof of vaccination, recent illness or negative tests to enter a stadium. After infection rates soared, leading politicians are concerned those conditions aren’t enough, even as other European leagues carry on.

Leipzig’s home state of Saxony has persistently had the country’s highest infection rates in recent weeks and now it has the toughest restrictions, with no fans allowed at all. That also affects Leipzig’s Champions League game against Manchester City next month. Germany sets its policy state by state, so Bundesliga champion Bayern Munich played in front of just 12,000 people on Saturday after previously having a full house of 75,000. Cologne was allowed the biggest crowd this week at 50,000.

Leipzig played without five players, among them first-choice goalkeeper Péter Gulácsi and forward Yussuf Poulsen, who are in isolation after positive tests for the coronavirus. American coach Jesse Marsch missed his second game of the week after testing positive along with three other staff members.

Leipzig overcame that obstacle midweek in a 5-0 Champions League thrashing of Belgian team Brugge, but the depleted team was outclassed against Bayer Leverkusen, a fellow contender for the Champions League places.

After Diaby had a goal ruled out for offside, 18-year-old Florian Wirtz gave Leverkusen the lead with a smart run onto a pass over the top, holding off full back Angelino before scoring. Another ball from deep set up the second goal, Jonathan Tah playing in Diaby to double Leverkusen’s lead.

Silva got Leipzig back in the game with a header but Leverkusen responded almost immediately, with Diaby passing for Jeremie Frimpong, whose deflected shot looped over the goalkeeper. Leipzig’s Dominik Szoboszlai hit the post with a late penalty.

Leverkusen climbed past Freiburg to third with the win, while Leipzig is eighth as the virus-enforced absence deepened its existing problems trying to rebuild after off-season departures.

Earlier, Evan Ndicka headed the winning goal in added time to give Eintracht Frankfurt a 2-1 win over Union Berlin after he earlier gave away a penalty to let Union back into the game, in front of a crowd of 24,000.

The French center back joined a last desperate attack as Frankfurt pushed for a winning goal in the fifth minute of injury time. He leapt highest in a crowd to meet Filip Kostic’s cross from deep and head it in for 12th-place Frankfurt’s first home league win of a so-far disappointing season.

Frankfurt dominated the first half against a Union team that struggled to get into the game, and opened the scoring through Djibril Sow’s powerful shot from the edge of the box in the 22nd minute. The hosts could easily have scored two or three more before the break if not for their poor shooting, particularly in evidence when Rafael Borré scooped Filip Kostic’s cross over the bar from close range.

It seemed Frankfurt had paid the price when Ndicka brought down Union forward Taiwo Awoniyi, allowing Kruse to convert the resulting penalty in the 62nd. Ndicka redeemed himself with his late header, Frankfurt’s fifth added-time goal in six games in all competitions. 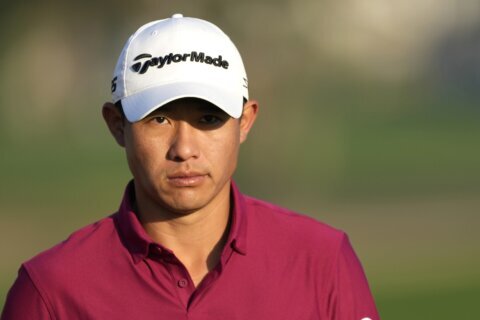