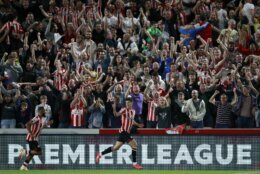 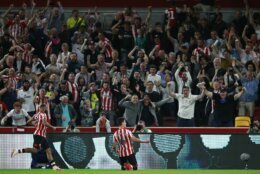 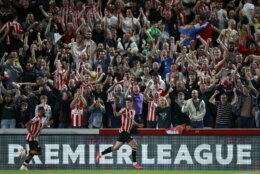 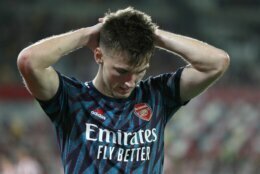 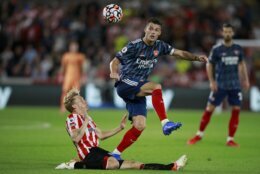 BRENTFORD, England (AP) — Brentford started its first topflight campaign since 1947 by stunning Arsenal 2-0 Friday in the opening game of the Premier League season.

Sergi Canos put Brentford ahead in the 22nd minute and Christian Noergaard headed in the second in the 73rd after Arsenal failed to deal with a long throw-in, handing the promoted club a perfect start to life in the Premier League in front of nearly 16,500 fans at the Community Stadium.

Those fans finally had a chance to celebrate inside the stadium, which was opened last year amid the lockdown when no supporters were allowed into games.

They had waited even longer for a moment like this. Brentford’s last game in England’s top division was a 1-0 loss to Arsenal, in May 1947. Now the team is top of the league for at least an evening, ahead of the rest of the weekend’s games.

“Nobody who was here will ever forget that. And I’m proud to be a part of that,” Brentford manager Thomas Frank said. “I have such belief in this group of players, so even though I knew we were going to face Arsenal, a massive club with unbelievable players, I had a feeling I would be disappointed if we didn’t beat them.”

For Mikel Arteta’s Arsenal, it was another disappointing performance and a worrying start. The team only finished eighth last season and showed little sign of having sorted out its previous problems. With strikers Pierre-Emerick Aubameyang and Alexandre Lacazette both missing — Arteta said they were feeling “unwell” — Arsenal again struggled to create any kind of clear scoring chances despite dominating possession for stretches of the game.

And their defensive shortcomings showed again.

Brentford’s opener came after right-back Calum Chambers hacked the ball off the byline, only for it to come back via Ethan Pinnock to Canos, who cut inside the defender and buried a low shot inside Bernd Leno’s near post.

For the second goal, Arsenal’s defenders allowed a long throw from Mads Bech Sorensen to bounce in the six-yard box and Norgaard arrived at the far post to head into an empty net.

Arsenal’s academy striker Folarin Balogun was handed his first Premier League start but was taken off before the hour mark. He was replaced by Bukayo Saka, who was given a standing ovation from the Brentford fans after being subjected to racist abuse following his penalty miss for England in the European Championship final loss to Italy.

“I don’t want to use excuses. We had a team out there good enough to achieve a different result,” Arteta said. “We know we have to improve.” 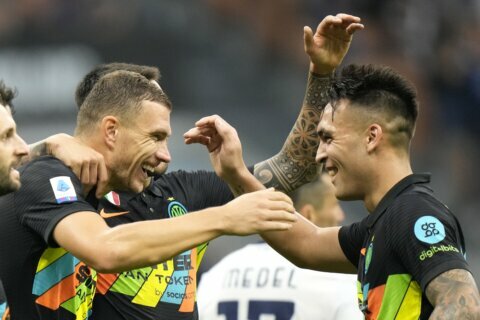 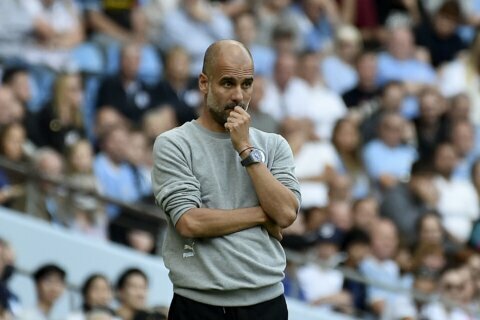