LSU plays fellow Southeastern Conference member Tennessee in the best-of-3 Knoxville Super Regional. The Tigers, who opened the regional with a loss to Gonzaga, won four games in three days — including consecutive wins over the Ducks — to advance.

Oregon closer Kolby Somers came on with the Ducks leading 7-6 and pitched a scoreless seventh inning but walked Dugas and gave up a double to Cade Doughty to open the eighth. Bianco struck out and Cade Beloso reached on a fielder’s choice as Dugas narrowly beat the tag at home to tie it. Beloso advanced to second and Doughty scored on a balk — the fifth lead change of the game — and pinch runner Will Safford scored on a single to center field by freshman Jordan Thompson to give LSU a 9-7 lead.

Aaron Zavala hit a two-run shot in the top of the third inning to give Oregon (39-16) a 4-2 lead and, after Tanner Smith reached on an error to lead off the seventh, Kenyon Yovan homered to center to make it 7-6.

Doughty went 3 for 4 with two doubles and two runs. 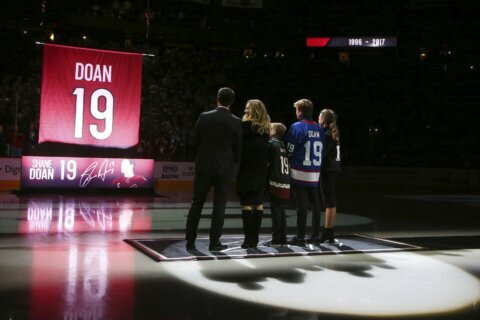