ZURICH (AP) — Amid a diplomatic incident over flags at the hockey world championship in Latvia, the governing body of the sport on Tuesday sided with Belarus, which is under international pressure after forcing a passenger jet carrying an opposition journalist to land in Minsk.

The Zurich-based International Ice Hockey Federation asked the mayor of Latvian capital Riga to “urgently take down” the IIHF flags to protest to what it called a political gesture.

On Monday, the official flag of Belarus was replaced at a display in Riga for the 16-nation tournament with a flag adopted by opponents of the country’s authoritarian leader, Alexander Lukashenko.

Latvian authorities switched the flags in an apparent show of solidarity with the international furor that followed a commercial flight Sunday from Greece to Lithuania being diverted so the journalist could be arrested.

“(We) are an apolitical sports organization,” said the IIHF, which reluctantly removed Belarus as co-host of the worlds in January after sponsors threatened to withdraw.

Lukashenko has stayed in office since August amid widespread street protests after claiming victory in a disputed presidential election.

Belarus and Latvia have each expelled some of the other’s diplomats in fallout from the flag controversy.

In a statement, the IIHF said Belarus’ hockey team is separate from the national government.

“The players have been welcomed to Latvia as guests and should not have to see their flag removed without their consent from the public display of the 16 participating countries,” the IIHF said.

The men’s worlds championship is one of the last IIHF events in the 27-year presidency of René Fasel, who has long been a supporter of Belarus and Russia.

Fasel’s visit to Belarus in January, when he embraced Lukashenko, was criticized by opposition groups. 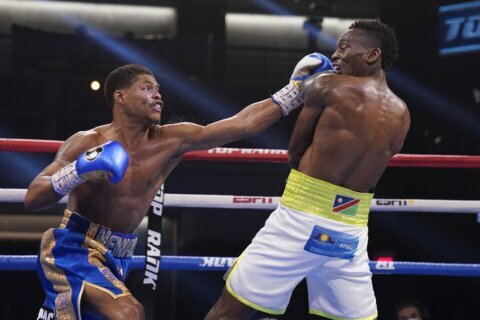