Barcelona aims to keep up its winning run away from home and deal a potentially decisive blow to Real Madrid’s league title defense when the fierce rivals meet. Barcelona trails struggling league leader Atlético Madrid by one point, while Madrid is just three points adrift. Barcelona has won nine straight league games away from home, while Madrid is flying high after beating Liverpool in the Champions League. Lionel Messi will aim to break his run of six clásicos without a goal. He holds the rivalry’s record of 26 career goals against Madrid, which will be without starting center backs Sergio Ramos and Raphael Varane. Cádiz visits Getafe in its first match since one of its players was accused of racially abusing a Black player of Valencia. Also, last-placed Alavés seeks a win at Basque rival Athletic Bilbao, struggling Eibar hosts Levante.

A maximum of four wins will see Manchester City regain the Premier League title, and the first of those could come at home to Leeds. It is a match that reunites City manager Pep Guardiola with his coaching mentor, Marcelo Bielsa. The managers have been very complimentary about each other ahead of the game, with Bielsa calling Guardiola a “magical man” because of the way his teams play. Guardiola responded by saying he always looked at the Argentine as a role model. City has seven games left and leads by 14 points from Manchester United, which plays on Sunday. After the lunchtime City-Leeds game, Liverpool hosts Aston Villa looking for a win to keep the pressure on fourth-placed West Ham and fifth-placed Chelsea in the race for Champions League qualification. Liverpool would move tied on points with West Ham with a win. Chelsea would go fourth with a victory at Crystal Palace in the late game.

Bayern Munich has a seven-point lead with seven games remaining in its pursuit of a record-extending ninth Bundesliga title in a row. It would take a major shock for Bayern to drop points at home to Union Berlin. Third-placed Wolfsburg visits fourth-placed Eintracht Frankfurt in a meeting of teams looking to return to the Champions League next season — for the first time since 2016 for Wolfsburg, and since 1960 for Frankfurt. Borussia Dortmund is seven points off the Champions League places but hopes to cut the deficit against Stuttgart. Second-placed Leipzig visits Werder Bremen after losing to Bayern last week. Hertha Berlin hosts Borussia Mönchengladbach.

AC Milan coach Stefano Pioli will be facing his hometown club when the Rossoneri visit Parma. While its title hopes are fading with city rival Inter Milan 11 points ahead, Milan is in a tight battle for second place with Juventus only one point behind and Atalanta two points back. Fifth-placed Napoli is also in the running for a top four finish and a Champions League spot. Parma, which was taken over by the Iowa-based Krause Group in September, is second to last and attempting to avoid relegation. Torino, which sits just above the drop zone, visits Udinese, and Spezia hosts last-placed Crotone.

Defending champion Paris Saint-Germain will be missing two of its best players for the trip to a Strasbourg side not yet clear of relegation. Neymar is suspended following his red card against league leader Lille in last weekend’s defeat, while central defender Marquinhos sustained a right adductor injury during the midweek win against Bayern Munich in the Champions League. PSG, which is bidding to avoid a ninth league defeat, will reassess Marquinhos’ fitness on Sunday. PSG striker Mauro Icardi remains sidelined, but Strasbourg top scorer Ludovic Ajorque is also out injured. In the other game, Marseille coach Jorge Sampaoli looks to make it four wins in five since taking charge. His revitalized side travels to Montpellier, which is also vying for a Europa League place next season. 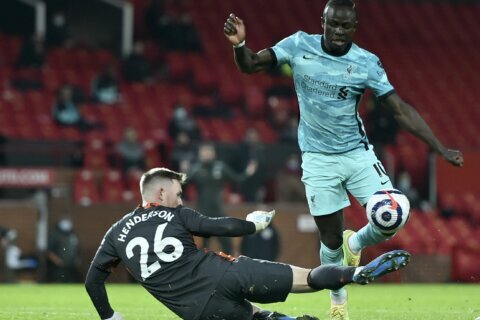