Leicester’s fine season hit a standstill recently but Brendan Rodgers’ side remains third in the Premier League going into its match against Sheffield United. The visitors are in last place and announced Saturday that manager Chris Wilder has left by mutual consent. Manchester United, which hosts fifth-place West Ham, is a point ahead of Leicester in second place. The north London derby sees Tottenham trying to keep in touch with the top four while Arsenal is seven points behind its neighbor in 10th place. A lack of consistency all season has meant the rivals seem to have different priorities away from the league with Spurs in the League Cup final and both teams looking to win the Europa League to qualify for the Champions League. Southampton hosts relegation-threatened Brighton which is looking to move further clear of the drop zone.

League leader Inter Milan will be confident of recording an eighth successive Serie A win when it visits relegation-threatened Torino. Inter is six points ahead of second-place AC Milan, which has a tricky match at home to Napoli. Nine-time defending champion Juventus is four points behind Milan, having played a match less, and visits struggling Cagliari. The Bianconeri are still reeling from their Champions League exit to Porto. Cagliari is only two points above the relegation zone and 18th-place Torino, which has played two matches fewer. Roma will be looking to move into the top four with a win at Parma. Also, Bologna hosts Sampdoria.

Sevilla hosts Real Betis in an always hotly contested Seville derby. Julen Lopetegui’s Sevilla has hit its worst patch of the season, going three rounds without a win in the Spanish league and out of the Champions League at the hands of Borussia Dortmund. Sevilla must rebound to protect its hold on fourth place and the final Champions League berth. Betis has climbed into sixth place at six points behind Sevilla. Basque club Real Sociedad is in fifth place — three points behind Sevilla — before it visits Granada. Villarreal is at Eibar with both clubs winless since January. Athletic Bilbao faces Celta Vigo and hopes to recover its good form that was interrupted this week with a loss to leader Atlético Madrid.

Eintracht Frankfurt can put a dent in Leipzig’s bid to challenge Bayern Munich for the Bundesliga title when they meet in Saxony. Frankfurt was fourth going into the 25th round of games, in the last qualification spot for the Champions League. Frankfurt won five games in a row before a surprise loss at Werder Bremen gave Adi Hütter’s team its first defeat of 2021. That was followed by a draw against Stuttgart last weekend, and the team can ill afford any more slipups if it hopes to qualify for the Champions League. Borussia Dortmund and Bayer Leverkusen are also targeting Champions League qualification. Leverkusen hosts relegation-threatened Arminia Bielefeld on Sunday. Also, Stuttgart hosts Hoffenheim.

Neymar has still not recovered from an adductor injury and misses defending champion Paris Saint-Germain’s home game against next-to-last Nantes, while striker Moise Kean is also out as he recovers from COVID-19. PSG can go top of the league on goal difference if it wins and leader Lille only draws at fourth-place Monaco, which is seven points behind Lille. Two of the league’s most improved sides meet as Lens hosts Metz, with both pushing for a place in next season’s Europa League. 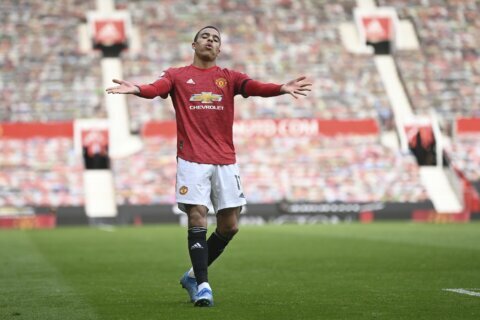