TAMPA, Fla. (AP) — Ross Colton scored in his NHL debut and Andrei Vasilevskiy made 25 saves in the Tampa Bay Lightning’s 3-0 victory over the Carolina Hurricanes on Wednesday night.

Blake Coleman and Barclay Goodrow also scored, and Alex Killorn had two assists in the third of four straight games between the teams. Vasilevskiy had his 22nd career shutout and first since March 2020 against Montreal.

Alex Nedeljkovic made 25 saves for the Hurricanes after shutting out the Lightning in his previous start. Carolina has lost consecutive games for the first time this season.

Colton opened the scoring on his first career shot on goal during his second career shift, pushing the puck under Nedeljkoviv’s pads at 6:43. Colton is the ninth player in franchise history to score in his NHL debut.

The teams will finish the series Thursday night in Tampa. They split the first two games in Raleigh.

TORONTO (AP) — William Nylander tied it with 1:28 left in regulation and scored 1:06 into overtime to lift NHL-leading Toronto past Calgary.

Michael Hutchinson stopped 21 shots in his second consecutive start with Frederik Andersen out with a lower-body ailment. Auston Matthews had two assists to help Toronto split the two-game series and improve to 15-4-2.

Andrew Mangiapane scored for Calgary with 3:27 left in the third.

David Rittich made 37 saves in his second straight start with Jacob Markstrom sidelined by an upper-body injury. He beat the Maple Leafs 3-0 on Monday night.

Defensemen John Klingberg, Esa Lindell and Joel Kiviranta scored for the Stars in the second of three straight against Florida.

Khudobin has shut out Florida three times in nine career starts. He has 10 career shutouts overall.

The team will finish the series Thursday night. Florida won 3-1 on Monday night in the opener.

GLENDALE, Ariz. (AP) — Conor Garland and Christian Dvorak scored in a shootout and Arizona overcame a three-goal deficit for the second straight game to beat Anaheim.

Arizona came back from a 3-0 deficit to beat Anaheim 4-3 in a testy, fight-filled game Monday night.

The Ducks had a three-goal lead in the second period of the rematch on goals by Max Comtois, Max Jones and Josh Mahura. The Coyotes again revved it up late, pulling to 3-2 on goals by Tyler Pitlick and Jakob Chychrun less than two minutes apart in the third period. Phil Kessel tied it with 3:21 left in regulation.

PHILADELPHIA (AP) — James van Riemsdyk and Shayne Gostisbehere each scored a power-play goal and Claude Giroux had three assists in his return from a COVID-19 absence to lead Philadelphia past New York.

Chris Kreider had a hat trick for the Rangers on three tap-ins in front.

Giroux, the Flyers’ captain, sat out two weeks after testing positive for coronavirus and missed their loss Sunday to Boston at Lake Tahoe. He played his 903rd career game to tie with Bill Barber for most in the regular season with the Flyers.

Cal Petersen made 35 saves, improving to 3-0-1 in his last four starts.

Oskar Sundqvist scored late in the third for the Blues. They are 1-5-1 in their last seven home games.

Mats Zuccarello, Zach Parise, Marcus Foligno and Ryan Hartman also scored for the Wild, who finished 4-1 on their road swing. 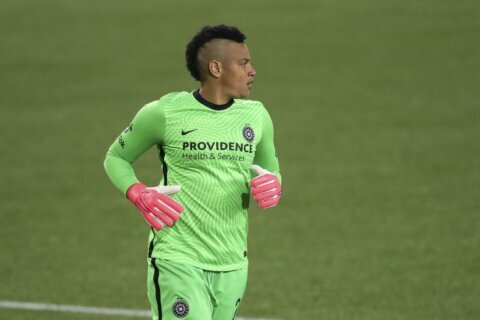