Liverpool is seven points behind Premier League leader Manchester City heading into a tricky-looking away match against West Ham, with the Hammers one of the surprises of the season under David Moyes. Liverpool got its title defense back on track with a 3-1 win at Tottenham on Thursday but the champions cannot afford a slipup if they are to keep in touch with City, which has won its last eight league games. Liverpool starts in fourth place and two points ahead of West Ham, which has won its last four straight. Tottenham is in sixth place and is set to be without striker Harry Kane, who was injured against Liverpool, for its away match against Brighton. Thomas Tuchel takes charge of his second match as Chelsea manager when Burnley visits Stamford Bridge, and third-place Leicester hosts Leeds.

Spanish leader Atlético Madrid visits Cádiz aiming to take full advantage of Real Madrid’s loss at home to Levante on Saturday. Coming off seven straight wins in the league, Diego Simeone’s side has a seven-point advantage over second-place Madrid and two matches in hand before the trip to southern Spain. Luis Suárez is the joint-leading scorer of the league with Sevilla’s Youssef En-Nesyri with 12 goals. Suárez has scored three goals in Atlético’s last two wins. Barcelona needs a victory at Camp Nou over a resurgent Athletic Bilbao to move level on points with Madrid. New coach Marcelino Garcia Toral has Bilbao on a five-game winning streak in all competitions. Also, Granada hosts Celta Vigo, while Alavés faces Getafe needing a win to escape the relegation zone.

Atalanta hosts Lazio for the second time in a week with the capital side looking for revenge following its Italian Cup defeat. Atalanta beat Lazio 3-2 on Wednesday in the quarterfinals. It will be looking for a similar result in the league to move into the top four in Serie A. But seventh-place Lazio is only two points behind Atalanta. Roma is fourth, a point above Atalanta, and hosts Hellas Verona. Verona won 3-0 by default earlier in the season after Roma fielded an ineligible player. Sixth-place Napoli hosts Parma, which is in the relegation zone along with Cagliari and Crotone. Cagliari welcomes Sassuolo while Crotone hosts Genoa. Also, Udinese visits Spezia.

Cologne hopes to leave the Bundesliga’s relegation zone with a win at home over Arminia Bielefeld. Bielefeld is just two points ahead of Cologne, which boosted its squad with former Schalke star Max Meyer. The club is hoping the now 25-year-old Meyer can live up to his potential after a disappointing spell at English team Crystal Palace. Cologne is yet to win a league game at home this season, while Bielefeld has only won one of its eight away games. Wolfsburg will aim to extend its four-game unbeaten run with a win over Freiburg in Sunday’s late game.

Defending champion Paris Saint-Germain finds itself in the rare position of being involved in a three-way title challenge, with Lille and Lyon. PSG and Lille are both trailing Lyon by one point. PSG needs a win away to 19th-place Lorient to guarantee reclaiming top spot since it has a better goal difference than Lille, which is expected to beat 18th-place Dijon at home. PSG will be without midfielder Marco Verratti and central defender Abdou Diallo after both tested positive for the coronavirus this week. Elsewhere, fourth-place Monaco looks to make it seven games unbeaten when it travels to play former France coach Raymond Domenech’s struggling Nantes side. 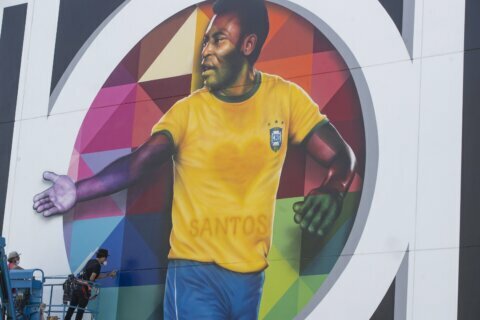 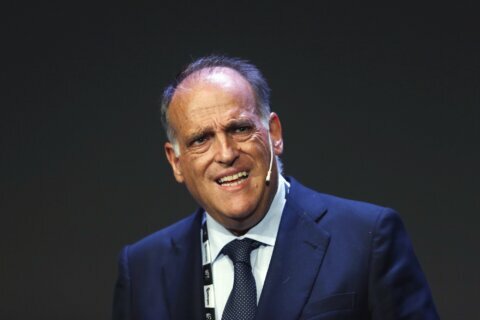