With the conclusion of the group stage of the Nations League, Europe’s top soccer countries have played their final competitive games ahead of the World Cup.

Here’s how things are shaping up for a continent that has provided the last four winners of the sport’s biggest prize.

Spoiler alert: it could be better.

Defending World Cup champion France has won just one of its last six matches, its worst record in the buildup to a World Cup since 1958. It’s difficult to draw conclusions from its last two Nations League matches, though, since France had 14 players out injured. If there were hopes the new generation of French midfielders was ready to take over in case Paul Pogba and N’Golo Kanté don’t recover in time for the World Cup, they may have been dashed. Eduardo Camavinga endured a disastrous first half in the 2-0 loss to Denmark and he might be fighting for his squad place. Adrien Rabiot, Youssouf Fofana and Aurelien Tchouaméni are better placed in coach Didier Deschamps’ pecking order even if there are still concerns. Fofana made a convincing debut in the win against Austria but lost too many balls after coming in as a replacement for Camavinga against Denmark. As for Tchouameni, he did not live up to expectations against Denmark. Kanté, who is currently sidelined by a hamstring injury, is the player France cannot afford to be without.

If France’s form is troubling, England’s is even worse. Make that six games without a victory for England, the team’s longest winless run since 1993. Never has England entered a major tournament on such a streak. The goodwill toward coach Gareth Southgate and some of his players, notably Harry Maguire, has dipped among fans and the media. Crucially, there are a number of players either not playing enough for their clubs or simply out of form — and Southgate has suggested he will keep faith with them in Qatar because they have built up enough credit with him after England’s runs to the World Cup semifinals in 2018 and the European Championship final last year. Left back, center back and the lack of a creative central midfielder to help run a game are England’s biggest weaknesses. Many teams will envy England’s attacking options, though there’s still a big dependency on striker Harry Kane.

Belgium ended its Nations League campaign knowing one thing for sure. And it’s not reassuring. With just one preparation game left before the World Cup — a friendly against Egypt on Nov. 18 — Belgium desperately needs Romelu Lukaku. In the absence of the injured striker, Michy Batshuayi simply could not impose himself as a credible replacement. Batshuayi was ineffective in the 1-0 loss to the Netherlands, a match Belgium entered needing to win by three goals or more to advance. Instead, the loss marked the first time since the 2018 World Cup semifinals that Belgium was defeated without scoring. Batshuayi made way for Charles De Ketelaere after halftime, but the AC Milan player couldn’t create much in a false No. 9 role. Lukaku is expected to return soon after a thigh injury. Belgium’s chances in Qatar might depend on him.

Germany’s games against England and Hungary provided more questions than answers two months before the World Cup which Germany last won in 2014. The biggest question: how good is the team, really? Answer: Nobody knows. Hansi Flick’s team defeated a weakened Italy 5-2 in its previous game in June, but failed to force a breakthrough against a well-organized Hungary and lost 1-0 at home. Germany then threw away a 2-0 lead in England before Kai Havertz rescued a 3-3 draw. Havertz and Bayern Munich’s Jamal Musiala were the only positives to be taken from the two games. When the Germans control possession, they lack the decisive final pass, and England’s late rally shows they are prone to collapse. The win over Italy was Germany’s only win in seven games. It conceded in each, adding defensive questions to the mix for Flick.

Spain, the 2010 champion, is one of the few European powers heading to the World Cup on a high after again reaching the Nations League’s final four. Luis Enrique’s team rebounded from losing to Switzerland to end a 22-game unbeaten run at home by winning 1-0 at local rival Portugal, potentially one of its main threats in Qatar. Spain hadn’t won at Portugal in nearly two decades. La Roja was unbeaten in eight games before losing to Switzerland, a run stretching back to last year’s Nations League’s final four. Also on a high will be 20-year-old Athletic Bilbao forward Nico Williams, who set up Alvaro Morata’s winner against Portugal to likely secure his spot in the World Cup squad. Portugal, meanwhile, will have to live with the disappointment of the last-day elimination at home, and with doubts surrounding Cristiano Ronaldo’s form. Ronaldo, who is likely to play in his last World Cup, had some uncharacteristic misses against Spain and isn’t currently in Manchester United’s first-choice team.

Europe might need a first-time champion if the continent is to deny in-form Brazil and Argentina. Croatia, the beaten finalist in 2018, again looks good under the leadership of 37-year midfielder Luka Modrić, topping its Nations League group after home-and-away wins over Denmark. The Danes have been among Europe’s most consistent teams with playmaker Christian Eriksen restored to the lineup while the Netherlands, a three-time World Cup finalist and guided by wily coach Louis van Gaal, kept clean sheets in wins over Poland and Belgium in the Nations League. The Dutch have beaten Belgium twice this year. Then there’s Serbia and Switzerland, in-form teams coming off back-to-back wins with key strikers scoring. Aleksander Mitrović now has 50 goals for Serbia and Breel Embolo’s goals were decisive for Switzerland, including in a 2-1 win at Spain. Serbia vs. Switzerland on Dec. 2 shapes to be an intense rematch of their politically charged game at the 2018 World Cup and they are in the same group as Brazil, which knocked Belgium off the top of the world ranking this year. 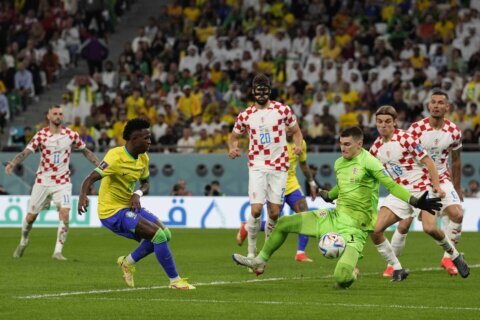