Coronavirus News: Kids could start getting vaccines by Nov. 4-5 | Is it time to get a COVID-19 booster? Which one? | Local cases of COVID-19 | How many in DC region are vaccinated?
Home » Soccer News » Steffen in goal as…

Chris Richards, a 21-year-old central defender, was given his first competitive start as the Americans fielded their youngest lineup in a World Cup qualifier, averaging 22 years, 229 days. That broke the previous mark of 23 years, 85 days set at the Sept. 8 match at Honduras, a 4-1 win.

Midfielder Yunus Musah and winger Tim Weah were the only holdovers from the lineup that started the 1-0 loss at Panama on Sunday. Paul Arriola, who started in Panama, was in the original starting lineup announced an hour before kickoff but was replaced about 45 minutes later by Weah due to an injured right groin.

Berhalter inserted a new back four of right back Sergiño Dest, Chris Richards and Miles Robinson in central defense, and Antonee Robinson at left back.

Tyler Adams was in defensive midfield and captained the team, and Weston McKennie in advanced midfield with Musah. Brenden Aaronson and Weah were on the wings, and Ricardo Pepi headed the attack.

Steffen and Richards increased U.S. qualifying debuts to 23 in five matches this cycle, trailing only 1998 (29), and 2006 and 2010 (26 each). Richards was making just his fourth international appearance.

Musah is the only American to start all three October qualifiers.

The match was played at Lower.com Field, the $300 million-plus downtown home of the Columbus Crew that opened in July on the banks of the Scioto River.

The U.S. began the night with eight points, second to Mexico (11) and ahead of Panama on goal difference. Canada (seven) was fourth, followed by Costa Rica (six), El Salvador (five), Honduras (three) and Jamaica (two).

The top three nations in North and Central America and the Caribbean qualify from the 14-match round for next year’s World Cup in Qatar, and the No. 4 team advances to a playoff. 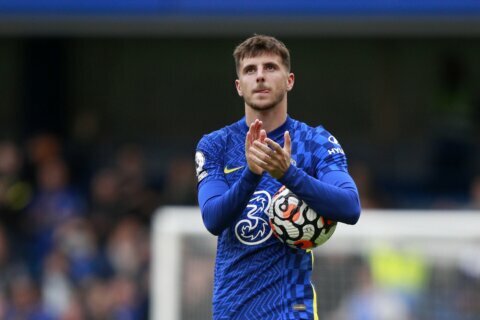