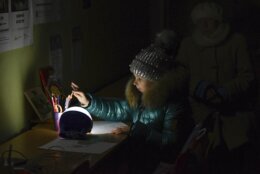 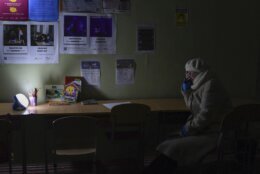 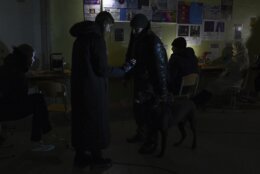 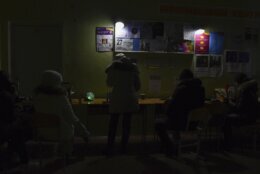 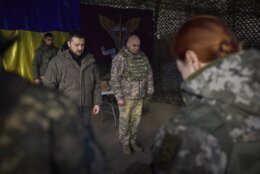 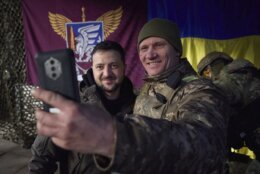 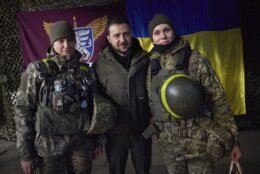 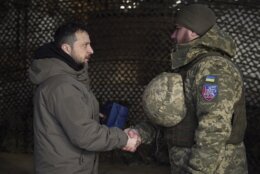 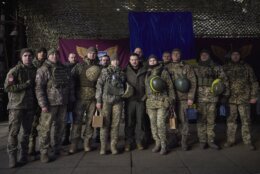 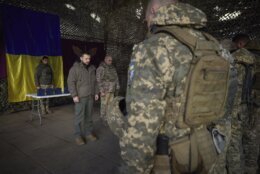 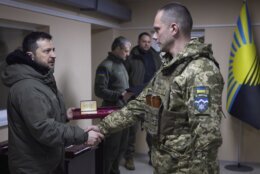 KYIV, Ukraine (AP) — Drones struck inside Russia’s border with Ukraine on Tuesday in the second day of attacks exposing the vulnerability of some of Moscow’s most important military sites, experts said.

Ukrainian officials did not formally confirm carrying out drone strikes inside Russia, and they have maintained ambiguity over previous high-profile attacks.

But Britain’s Defense Ministry said Russia was likely to consider the attacks on Russian bases more than 500 kilometers (300 miles) from the border with Ukraine as “some of the most strategically significant failures of force protection since its invasion of Ukraine.”

A fire broke out at an airport in Russia’s southern Kursk region that borders Ukraine after a drone hit the facility, the region’s governor said Tuesday. In a second incident, an industrial plant 80 kilometers (50 miles) from the Ukrainian border was also targeted by drones, which missed a fuel depot at the site, Russian independent media reported.

“They will have less aviation equipment after being damaged due to these mysterious explosions,” said Yurii Ihnat, spokesman for the Air Force Command of the Armed Forces of Ukraine. “This is undoubtedly excellent news because if one or two aircraft fail, then in the future, some more aircraft may fail in some way. This reduces their capabilities.”

Moscow blamed Kyiv for unprecedented attacks on two air bases deep inside Russia a day earlier. The attacks on the Engels base in the Saratov region on the Volga River and the Dyagilevo base in the Ryazan region in western Russia were some of the most audacious inside Russia during the war.

In the aftermath, Russian troops carried out another wave of missile strikes on Ukrainian territory that struck homes and buildings and killed civilians, compounding damage done to power and other infrastructure over weeks of missile attacks.

Approximately half of households in the Kyiv region remain without electricity, the regional governor said Tuesday, while authorities in southern Odesa — which was hard hit Monday — say they have managed to restore power to hospitals and some vital services.

In a new display of defiance, Ukrainian President Volodymyr Zelenskyy traveled near the front line in the eastern Donetsk region. Marking Ukraine’s Armed Forces Day, he vowed to push Russian forces out of all of Ukraine’s territory.

“Everyone sees your strength and your skill. … I’m grateful to your parents. They raised real heroes,” Zelenskyy said in a video address to Ukrainian forces from the city of Sloviansk, a key Ukrainian stronghold in the east.

Russia’s Defense Ministry’s charged that the attack was launched with Soviet-made drones. After the collapse of the Soviet Union in 1991, which split Russia and Ukraine into separate countries, Ukraine inherited some Soviet-designed Tu-141 Strizh drones, which entered service in the 1970s and have a range of 1,000 kilometers (over 600 miles.)

They were designed for reconnaissance duties, but can be fitted with a warhead that effectively turns them into a cruise missile. Unlike modern drones, the Strizh, or Swift, drones can stay in the air only for a limited amount of time and fly straight to a designated target. Their outdated technology makes the drones easily detectable by modern air defense systems — and easy to shoot down.

A Russian pro-war blogger posting on the Telegram channel “Milinfolive” on Monday hit out at Russian military leadership, alleging that incompetence and lack of proper fortifications at the airbases made Ukrainian drone strikes possible.

Russia’s Defense Ministry said three Russian servicemen were killed and four others wounded by debris, and that two aircraft were slightly damaged in the strikes Monday.

After Ukrainian forces took control in November of the major Russian-occupied city of Kherson, neither side has made significant advances.

But Ukrainian officials have indicated that the country plans to pursue counteroffensives during the winter when frozen ground is conducive to moving heavy equipment. Kherson city is still being hit by Russian rocket attacks but if Ukrainian forces establish firm control there it could be a bridgehead for advancing toward Crimea.

The Engels base hosts Tu-95 and Tu-160 nuclear-capable strategic bombers that have been involved in strikes on Ukraine. Dyagilevo houses tanker aircraft used for mid-air refueling.

In a daily intelligence update on the war in Ukraine, Britain’s Defense Ministry said the bombers would likely be dispersed to other airfields.

Speaking in a conference call with reporters Tuesday, Peskov said that “the Ukrainian regime’s course for continuation of such terror attacks poses a threat.”

Peskov reaffirmed that Russia sees no prospects for peace talks now, adding that “the Russian Federation must achieve its stated goals.”

Ukrainian rocket attacks killed six people in the separatist-held city of Donetsk, about 100 kilometers (60 miles) south of where Zelenskyy spoke, said Denis Pushilin, head of the Russia-backed Donetsk People’s Republic. He said one of those killed was a 29-year-old member of the DPR parliament.

The towns lie across the Dnieper River from the nuclear plant, which was seized by Russian forces in the early stages of the war. Russia and Ukraine have for months accused each other of shelling at and around the plant.

The head of Ukraine’s northern Sumy region, which borders Russia, said that Moscow launched over 80 missile and heavy artillery attacks on its territory. Governor Dmytro Zhyvytsky said the strikes damaged a monastery near the border town of Shalyhyne.

Ihnat, the Ukrainian air force spokesman, said the country’s ability to shoot down incoming missiles is improving, noting there had been no recent reports of Iranian-made attack drones being used on Ukrainian territory.

US to send Ukraine longer-range bombs in latest turnaround