Russian defense ministry officials on Sunday insisted that an airstrike on the port of Odesa — less than a day after Russia and Ukraine signed an agreement on resuming grain shipments from there — had hit only military targets.
Listen now to WTOP News WTOP.com | Alexa | Google Home | WTOP App | 103.5 FM

KYIV, Ukraine (AP) — Russian defense officials insisted Sunday that an airstrike on the Ukrainian port of Odesa hit only military targets, but the attack tested an agreement on resuming grain shipments that the two countries signed less than a day before the assault.

Under the grain-shipment agreement obtained by The Associated Press, both Kyiv and Moscow agreed not to target vessels and port facilities involved in the initiative, including the ports of Odesa, Chernomorsk and Yuzhny.

The Ukrainian military said the attack involved four cruise missiles, two of which were shot down by Ukrainian air defenses.

Command spokeswoman Nataliya Humenyuk said no grain storage facilities were hit. Turkey’s defense minister, however, said he had had reports from Ukrainian authorities that one missile struck a grain silo while another landed nearby, although neither affected loading at Odesa’s docks.

It was not immediately clear how the airstrike would affect plans to resume shipping Ukrainian grain by sea in safe corridors out of the ports.

Russia and Ukraine on Friday signed identical agreements with the United Nations and Turkey in Istanbul aimed at clearing the way for the shipment of millions of tons of desperately needed Ukrainian grain, as well as the export of Russian grain and fertilizer.

Senior U.N. officials voiced hopes that the deal would end a months-long standoff that threatened food security around the globe.

Elsewhere on Sunday, Ukrainian authorities reported that Russian shelling continued to kill and wound civilians in Ukraine’s south and east.

The governor of the eastern Donetsk region, one of two that make up Ukraine’s industrial heartland of the Donbas and a key focus of Russia’s offensive, said two civilians had been killed and two more wounded over the previous 24 hours.

The U.K. military reported Sunday in its daily intelligence update that Russia was making “minimal progress” in its Donbas offensive, which it said remained small-scale and focused on the city of Bakhmut in the eastern Donetsk region.

The Ukrainian military’s General Staff confirmed in its regular update that Russia was “conducting military operations to create conditions” for an assault on Bakhmut, while firing on surrounding settlements and battling Ukrainian defenders for control of a nearby thermal plant.

In Ukraine’s south, regional officials said that at least five civilians were wounded by Russian shells in the Black Sea port of Mykolaiv on Saturday night and Sunday morning.

“Also, as a result of the scattering of munitions and their fragments, fires occurred in open areas in the city,” said Vitaly Kim, governor of the Mykolaiv region.

— A Washington-based think tank said Ukrainian forces are likely preparing to launch or have launched a counteroffensive in the Kherson region.

The Institute for the Study of War quoted Kherson Oblast Administration Adviser Serhiy Khlan as saying Ukrainian forces have seized unspecified settlements in the region, but he called on Ukrainian civilians to remain silent on the progress of the counteroffensive until Ukrainian authorities released official statements.

The ISW noted that open-source information on any progress by Ukrainian troops “will likely be limited and lag behind events.”

— Russian Foreign Minister Sergey Lavrov was in Cairo for talks with Egyptian officials as his country seeks to break diplomatic isolation and sanctions by the West over its invasion of Ukraine.

Lavrov landed in Cairo late Saturday on the first leg of his Africa trip, which will also include stops in Ethiopia, Uganda and Congo, according to Russia’s state-run RT television network.

Speaking at a news conference following bilateral talks with his Egyptian counterpart, Sameh Shukri, on Sunday, Lavrov said that he had “reaffirmed the commitment of Russian grain exporters to fulfill all their obligations” in the wake of the U.N.-backed deal to unblock grain shipments.

— Hungarian Prime Minister Viktor Orban said in a speech in Romania that Western sanctions against Russia have failed and that the war in Ukraine will not end “until there is a Russian-U.S. peace negotiation.”

Orban said Saturday in a speech in Baile Tusnad in central Romania that “a new strategy is needed which should focus on peace talks … instead of winning the war.”

“The situation is that today we are sitting in a car with flat tires on all four wheels,” he said. “It is quite obvious that the war cannot be won this way. Ukrainians will never win a war against Russia with American training officers and weapons.”

The far-right leader went on to say that had Donald Trump and Germany’s Angela Merkel still been in charge in their countries, “then this war would never have broken out.” 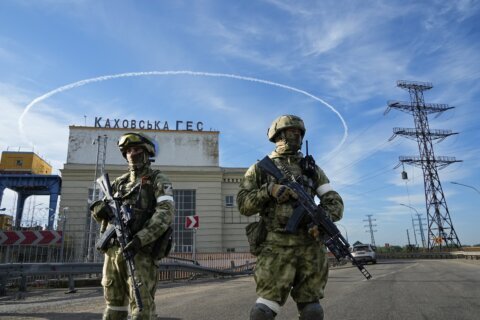