ATHENS, Greece (AP) — Wearing the names of heavily bombarded cities on its jerseys, Ukrainian soccer club Shakhtar Donetsk opened a series of charity games on a government-backed “Global Tour for Peace” with a 1-0 loss at Greek league leader Olympiakos on Saturday.

The tour aims to raise money for Ukraine’s military in the war against Russia, and also help Ukrainian refugees displaced by the war.

Shakhtar is also set to play Fenerbahce, Hajduk Split and Lechia Gdansk, with other opponents still to be confirmed. Soccer clubs around Europe have been offering to play games against Ukrainian clubs and host youth players after soccer in the country was shut down when Russia invaded in February.

Shakhtar was already displaced from its original home of Donetsk in 2014.

At Karaiskaki stadium in Piraeus on Saturday, Shakhtar players replaced their names on the back of their jerseys with those of cities bombarded by Russian forces, including Mariupol.

“The names of those cities, where so many people died, will remain forever in our hearts. The guys were crying in the locker room after the game,” Shakhtar captain Taras Stepanenko said. “We thank Olympiakos for giving us the opportunity to play the game … We hope we passed our message against war and for peace.”

Shakhtar’s Italian coach, Roberto De Zerbi, did not attend because he felt unwell a couple of hours before the game and doctors recommended that he stay at the hotel. He hopes to coach in the next game, against Polish team Lechia Gdansk, on Thursday.

Shakhtar, which had been playing in Lviv and Kharkiv before the war, had not played a game since December, and Stepanenko said his team did well given the lack of preparation. Players trained in Turkey before flying to Greece. All the team’s foreign players have been released and replaced by players from the youth academy, Stepanenko said.

The 32,000-seat stadium appeared to be not more than a quarter full. A lively contingent of Ukrainians occupied one end of the stadium. The opposite end, where Olympiakos hardcore fans normally sit, was empty. Their official fan club, called Gate 7, boycotted the game.

In a statement, Gate 7 said it “refused to take sides” and “play political games.”

A small section of seats was filled with 176 teddy bears and other children’s toys in memory of the 176 children who, Ukraine said Saturday, have died in the war since Russia’s Feb. 24 invasion

After a minute’s silence for the victims of war, the match began and the warm camaraderie lasted about five minutes before home fans started to treat it as a normal game of soccer and jeered their opponents.

Brazilian forward Tiquinho got the only goal with a header in the 22nd minute in a game where the score never really mattered. 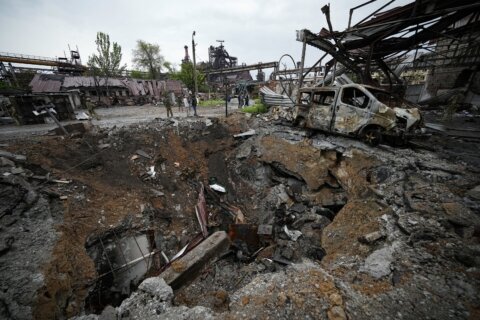