A senior at Marymount University, who was born in Ukraine but grew up in Northern Virginia, spent a frantic spring break in his war-torn homeland helping rescue his family.
Listen now to WTOP News WTOP.com | Alexa | Google Home | WTOP App | 103.5 FM

A senior at Marymount University, who was born in Ukraine but grew up in Northern Virginia, spent a frantic spring break in his war-torn homeland helping rescue his family.

Identified only by his initials A.C., the 23-year-old, majoring in graphic and media design, boarded a flight March 5 at Dulles International Airport to Berlin to begin a one-week odyssey that would give the brave student a lesson in war.

“I drove from Berlin to Warsaw, and I had to drive from Warsaw to Lviv where I was able to help my family move out safely to Warsaw,” said A.C, “I saw at least 15 to 20 dead bodies wrapped in plastic wrap and cloth laying outside of buildings,” he said.

The student, who moved to Northern Virginia at age 6, also witnessed truck convoys carrying much more than political slogans.

“I saw numerous trucks drive by, loaded with dead bodies,” he said.

The student at the Arlington university welcomed President Joe Biden’s announcement, made during his European visit Thursday, that the United States would receive 100,000 Ukrainian refugees.

“I don’t think it’s enough, but I do appreciate this step to accept these refugees,” A.C. said. He added that he hoped the U.S. would eventually accept up to 1,000,000 Ukrainian refugees. 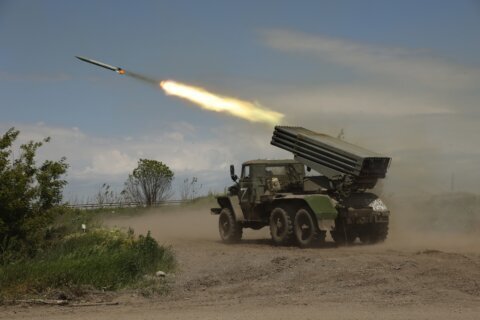