Already, the United States has worked with other Western and Western-allied nations to impose what are jointly some of the toughest sanctions ever leveled against a country. That includes sanctions against Russia’s financial institutions and systems, bans on much of its international trade, and individual sanctions targeting many of the defense officials, civilian leaders and oligarchs in Russia’s power structure.

Here’s a look at Zelenskyy’s other asks of the United States on Wednesday.

A NO-FLY ZONE — OR AN ALTERNATIVE

As expected, Zelenskyy in his appeal to the world’s superpower Wednesday renewed a request he has made repeatedly throughout the 3-week-old invasion: Western creation of a no-fly zone to block the Russian warplanes now attacking Ukraine’s cities and other civilian targets.

“Is this too much to ask,” so that “Russia would not be able to terrorize our cities?” the Ukrainian leader asked U.S. lawmakers listening, rapt, by video.

The U.S. has joined NATO in flatly rejecting creating a no-fly zone over Ukraine, which is not a member of the NATO bloc and is not protected by its defense pact.

Setting up such a zone would likely entail Western air forces directly engaging with Russia’s military. That would greatly increase the chances of a broader war between Russia and NATO members, something Biden says he’s not willing to risk for Ukraine. So would providing Ukraine with MiG fighter jets and a U.S. or NATO base to fly them out of, something else that the U.S. and NATO have said no to.

Notably, however, Zelenskyy also presented another option to the no-fly zone.

“If this is too much to ask, we offer you an alternative,” Zelenskyy said, leveraging the tougher ask to push for an easier one. He then asked for the Soviet-era S-300 anti-aircraft missile systems, or “similar systems.”

The S-300s use long-range missiles that are capable of flying hundreds of miles and knocking down cruise missiles as well as warplanes. The Soviet-era anti-air defense systems could be valuable in Ukraine continuing to defy Russia control of its skies, and in thwarting Russian air attacks on cities and other targets.

NATO members Bulgaria, Slovakia and Greece have the S-300s. U.S. Defense Secretary Lloyd Austin is expected to discuss a possible deal that would get some of those S-300s to Ukraine when he visits Bulgaria and Slovakia this week.

Slovakia has no objections to providing its S-300s to Ukraine, Slovak Defense Ministry spokesperson Martina Koval Kakascikova told The Associated Press. “But we can’t get rid of a system that protects our airspace if we don’t have any replacement.”

Any such transfer could be a three-country swap, with the U.S. or other NATO country providing Patriots or other air defense system to make up for any S-300s passed on to Ukraine.

Russia has a history of relying on warplanes and missiles to level cities and crush resistance in offensives in Chechnya and Syria.

Ukraine’s resistance to Russian forces, the horrifying toll on Ukraine’s people, and its charismatic president’s appeals, have Biden and lawmakers of both parties in Congress rushing to provide military and humanitarian support, within the limits Biden is setting in hopes of avoiding a broader war. The support includes a more than $13 billion legislative package Biden signed Tuesday.

Zelenskyy also appealed to the U.S. to intensify its already punishing package of financial sanctions against Russia, including hitting all the sitting members of Russia’s Duma and every other politician in office in Russia.

“In the darkest time for our country we call on you,” he said, speaking to lawmakers who rose to their feet repeatedly to applaud the Ukrainian leader. “New packages of sanctions are needed every week until the Russian military stops.”

The U.S., European nations and other world allies from the first days of Russia’s invasion enacted some of the toughest financial penalties in history. U.S. officials said the measures would cut Russia off from much of the world’s financial systems and trade, starve it of high tech and other imports, send the value of the Russian ruble plunging, and eventually plunge Russia into recession.

A steady stream of individual sanctions have also targeted powerful businesspeople and senior military and civilian officials in Russian President Vladimir Putin’s power structure, as well as their family members.

The status of any consideration of sweeping U.S. sanctions against Russian lawmakers wasn’t immediately known Wednesday. Notably, however, Biden pointed out in first announcing the start of sanctions over Putin’s invasion last month that the Russian leader was acting with the approval of Russia’s Duma.

‘MAKE SURE THE RUSSIANS DO NOT RECEIVE A SINGLE PENNY’

Zelenskyy urged U.S. companies still doing business in Russia to leave. He asked lawmakers to pressure any holdout businesses in their districts to get out.

“American companies must leave Russia’s market because it is flooded with our blood,” he said.

“Make sure that the Russians do not receive a single penny that they use to destroy our people in Ukraine” and for the “destruction of our country and the destruction of Europe.”

According to a list kept by Yale’s School of Management, 147 U.S. corporations have announced since Russia launched its invasion that they are pulling out of that country entirely.

Another 173 U.S. companies have said they are suspending operations.

With support in the West strong for Ukraine, and threats of boycotts of companies still doing business there, another roughly 70 American companies have said they are scaling back operations or holding off on new investment, but remaining.

Steady public pressure has helped winnow the total of companies that have made no announced change to their operations in Russia to fewer than 40, according to a list maintained by Jeffrey Sonnenfeld of the Yale School of Management,

Live updates | US to ship $100M in military aid to Ukraine 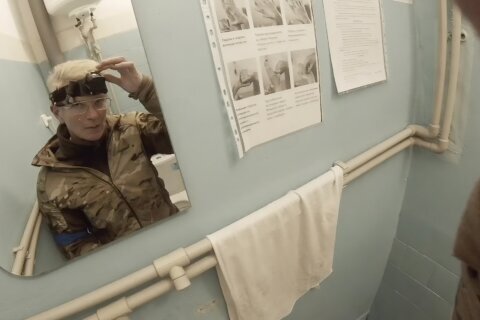