WASHINGTON — If change in property values, change in household incomes and education level are good indications of neighborhood gentrification, then two D.C. ZIP codes are among the 20 most gentrified neighborhoods in the nation.

The rankings, by rental listings site RentCafe, lists 20001, D.C.’s Mount Vernon neighborhood, as the nation’s second most gentrified neighborhood. Between 2000 and 2016 home values in 20001 increased by 207 percent. Median household incomes rose by 163 percent during that same period.

The number of bachelor’s degree holders living in the 20001 ZIP code increased by 212 percent.

Twelve of the top 20 most gentrified ZIP codes are in East Coast cities.

Only three are in West Coast cities. ZIP code 90014, which is downtown Los Angeles, is No. 1. There, home values rose 707 percent, household incomes rose 95 percent and the number of bachelor’s degree holders rose 857 percent.

ZIP codes in Houston, Philadelphia and Manhattan all make the top five.

“There’s a lot of things an urban area can and should aspire to excel in. This is not one of them,” said Balazs Szekely from RentCafe.com.

“Yet, even if gentrification is not something to strive for, it happens all the more often — and as there are ways to quantify it, we did just that, and a ranking arose. A less-than-glorious elite, if you will,” he said. 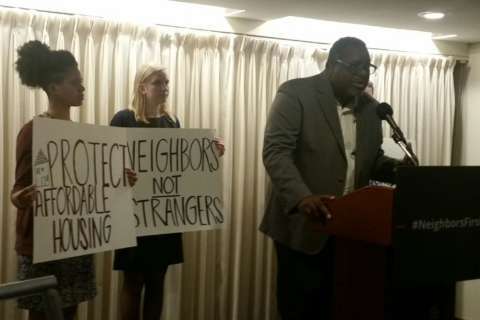 Group pushes for bill placing limits on home-sharing in DC