In its second day of deliberations, the jury of 10 women and two men spared Ronald Hamilton from what would have been the first death sentence in Virginia since 2011.
Listen now to WTOP News WTOP.com | Alexa | Google Home | WTOP App | 103.5 FM

MANASSAS, Va. — Ronald Hamilton, the Army staff sergeant convicted of capital murder last month for killing his wife and a Prince William County police officer has been sentenced to life in prison.

In its second day of deliberations, the jury of 10 women and two men was unable to reach a unanimous decision on Hamilton’s sentence.

The jury was deadlocked at six voting for a life sentence, and six voting for the death penalty. (Under Virginia law, if a jury can’t reach a unanimous verdict in capital cases, the judge imposes life in prison.)

“There is definitely a showing that jurors and other members of the citizenry here in the commonwealth of Virginia are increasingly less likely to impose the death penalty,” he said.

“We are pleased that the jury did not issue a death sentence,” said Ronald Hamilton Sr. “We thank the jury for their compassion, my son is remorseful for this incident.”

“Of course we’re disappointed, we felt the death penalty was appropriate this case,” Ebert said.

Hamilton was convicted of shooting his wife, Crystal, in February 2016 after learning she planned to attend a male dance revue with her girlfriends. After shooting her several times with a handgun, Hamilton used an AK-47 when police kicked down the door of their Woodbridge home, killing police officer Ashley Guindon.

Guindon was on her first shift with the department. Two other police officers were injured in the shooting.

“We wanted to send a message on the death penalty. If you kill a police officer you are going to get death,” Sharon Guindon, Ashley’s mother, told WTOP news partner NBC4’s Julie Carey.

“I was hurt because of the decision the jury made,” Murphy told NBC4. “He gets to walk free. Well, not free but he’s alive. I’ll never be the same again.”

In sentencing hearings, Hamilton’s defense attorney urged jurors to show Hamilton mercy, citing his military service, which included two tours of duty in Iraq. Hamilton wore his military uniform during most of the trial.

“This is a question of morality,” defense attorney Ed Ungvarsky said, asking them to spare Hamilton’s life. “What does your conscience tell you?”

But prosecutor Richard Conway said soldiers “don’t get a pass for capital murder.” Another prosecutor, Matthew Lowery urged jurors to “put him in the grave, because that’s what he deserves.”

EDITOR’S NOTE: An earlier version of this story had incorrectly stated that a death sentence would have been the first in Virginia since 2011. William Morva was executed by lethal injection in July 2017. 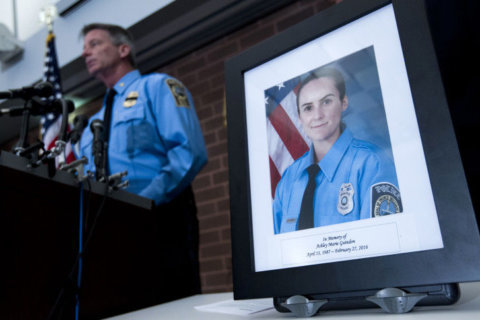