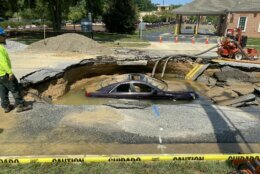 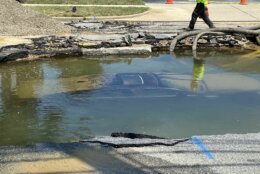 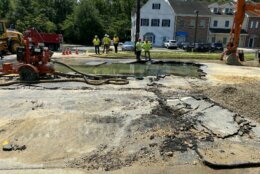 After more than 36 hours, repairs to a 30-inch water main break at Osborne Road near Upper Marlboro, Maryland, that created a sinkhole Wednesday has been completed, with crews hoping to start repaving the street on Friday.

A driver escaped with minor injuries after his car plunged into the water-filled sinkhole created by a water main break Wednesday morning.

The vehicle is out! Still some water to pump out of the hole before crews can begin the repairs to the water main. Long day and a long night of repairs ahead. pic.twitter.com/CJGDv2qPRU

Traffic Alert in Clinton: please avoid South Osborne Rd & Crain Highway due to a sinkhole in the roadway. Repair crews are on the scene. At this time, it is unclear how long the street will be shut down. #mdtraffic pic.twitter.com/tbz9C53fqW

WSSC said it was alerted to the break in the 30-inch water main around 4 a.m. Wednesday

Early Wednesday, a driver went through the perimeter established around the hole and drove into the sinkhole. Their car was completely submerged in water.

Prince George’s Fire and Rescue said the driver — a man — was taken to the hospital with minor injuries around 6:15 a.m. The car was removed about 4:30 p.m., WSSC said.

WSSC shut off the water. The agency also set up a water station until midnight for those who impacted by the water main repairs at the parking lot of the SunTrust bank on South Osborne Road.

The WTOP Traffic Center reported after midnight that the east side lanes on South Osborne Road had reopened.

EDITOR’S NOTE: An earlier version of this story said the sinkhole formed in Clinton, Maryland, when the actual location is closer to Upper Marlboro.