Police have arrested a suspect after an armed robbery and an armed carjacking that happened Friday morning in the City of Laurel.
Listen now to WTOP News WTOP.com | Alexa | Google Home | WTOP App | 103.5 FM
(1/3) 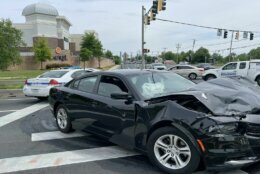 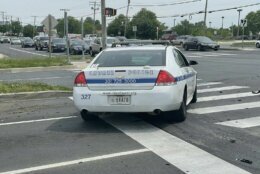 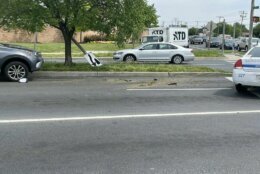 Police have arrested a suspect after an armed robbery and an armed carjacking that happened in the City of Laurel, Maryland, on Friday.

At about 10:32 a.m. on Friday, officers responded to the 14700 block of Baltimore Avenue for the report of an armed robbery at the AT&T store in Laurel Town Center, police said.

When police arrived, the suspect was still in the business and fled through the store’s backdoor, running towards Baltimore Avenue, according to Laurel police.

Officers then chased the suspect on foot to the area of Cherry Lane and Baltimore Avenue where the suspect carjacked a citizen at gunpoint, according to police.

The suspect attempted to flee the scene in the vehicle but was involved in a crash at the intersection of Cherry Lane and Baltimore Avenue.

The suspect fled the scene of the crash on foot and was shortly stopped by Laurel police officers, according to a press release.

Officers then arrested the suspect who was transported to a nearby hospital where he was treated and released for injuries from the motor vehicle crash, police said.

The driver and passenger in the second vehicle involved in the crash were taken to an area hospital where they are currently being treated for their injuries, police said. The driver of the third vehicle was treated and released from the scene, according to police.

NBC Washington reports that the suspect may be tied to other robberies in Maryland.

Police said the investigation is ongoing and anyone with information about the case to contact the Laurel Police Department at 301-498-0092. Anonymous tips can also be sent to LPDtips@laurel.md.us.