At 17, Noah Johnson is the youngest video gamer ever to win the Madden Challenge. Now the DeMatha Catholic High School senior is preparing for April's Madden NFL 20 Bowl, brimming with confidence that he can win it all.
(1/2) 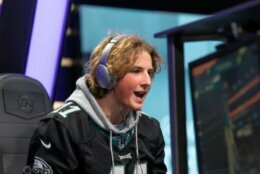 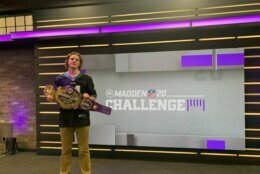 At 17, Noah Johnson is the youngest video gamer ever to win the Madden Challenge. Now the DeMatha Catholic High School senior is preparing for April’s Madden NFL 20 Bowl, brimming with confidence that he can win it all.

Last week Noah beat the pros and won the coveted Madden Championship belt and the $35,000 prize at the Jan. 28 Challenge in San Francisco.

“I was on cloud-9, it was insane winning the belt — I was super excited,” Noah said. “I put a lot of time into it and try to perfect my craft. I always practice and try to be the best.

“It takes a lot of hard work, just like any other thing you want to play like other professionals.”

Video game esports are growing by leaps and bounds and far from being a solo endeavor, Noah said gaming builds relationships and real skills. He also plays on DeMatha’s baseball team, but points out that while some kids may not be able to compete physically they could excel at gaming.

“I think esports, honestly, could be the future and could even get bigger than sports because they’re so inclusive to everyone. Some people might not be 6′ 7″ and be able to play in the NBA but anybody can pick up a controller and play,” Noah said.

Between his studies at DeMatha, Noah is diligently practicing for the Madden NFL 20 Bowl that will be held April 23, with a total prize pool of $220,000.

“The way I’ll prepare is I’ll play against other top guys … to see what they’re doing and see if I can beat them online,” Noah said.

His hopes are high.

“You got to be confident. If you don’t have confidence in yourself. then how can you think you’re going to win? You got to bring that confidence … you got to think that you’re the best at the game.”