WASHINGTON — It’s just the first weeks of school, but the parents of at least four Prince George’s County students say their children have had major issues with school buses.

The school system says only two of the incidents have been confirmed.

On Thursday, for instance, Symphani Bracey’s grandparents didn’t know where she was for two hours. The 3-year-old girl attends Chapel Forge Early Childhood Center in Bowie.

Bracey, who has special needs and is asthmatic, was supposed to be dropped off in Lanham at 12:30 p.m., but she never showed up. Her mother called the bus depot. Employees there said Bracey was never on the bus. Bracey’s mother called the school; they said the 3-year-old boarded the bus.

The bus driver responsible for taking Bracey home didn’t know how to get to her stop. She dropped off other children first, said county schools spokeswoman Sherrie Johnson. Also, Johnson said, the driver has been reprimanded for not calling anyone at the school or bus depot to update them.

“When they can’t find somebody, address it right there,” Symphani’s grandfather, Earl Bracey, told ABC7. “Don’t wait until the last minute. I’m not happy [with] the way it went down. I’m happy that she’s here.”

Johnson, on behalf of the school system, apologized for the mistake.

“In this incident, the district did not get it right,” she said in a statement. “We deeply regret the error and want to assure the school community that we are taking measures to make sure our students continue to be transported in a safe and timely manner.”

In a separate case, Takisha McAlpine said her 7-year-old son was dropped off four miles from his home on Tuesday. He told the driver he was at the wrong stop, but the driver wouldn’t take him back to Barack Obama Elementary School in Upper Marlboro.

A couple saw the boy and texted McAlpine.

Johnson said there is video of the incident. The bus driver said a conversation with the boy never happened. McAlpine said her other son — a 5-year-old — was dropped off at the correct stop that day, but without an adult around.

Transportation officials said they will review the video to see whether the 7-year-old told the bus driver he made a mistake.

According to school system policy, pre-kindergarten and kindergarten students should only be dropped off to responsible adults. Johnson said the bus driver saw someone he thought was responsible for the child.

“Prince George’s County Public School officials and transportation have been in constant communication with the children’s family members,” Johnson said in a statement. “Currently, we are still trying to understand all of the details related to this issue and will take the appropriate disciplinary and logistical changes as needed.”

These incidents come after a mother said her 4-year-old was put on the wrong bus Tuesday in Fort Washington. County school buses transport more than 80,000 students each day, on about 1,200 buses, that run 5,447 bus routes.

Drivers might be disciplined after the school system investigates the incidents. 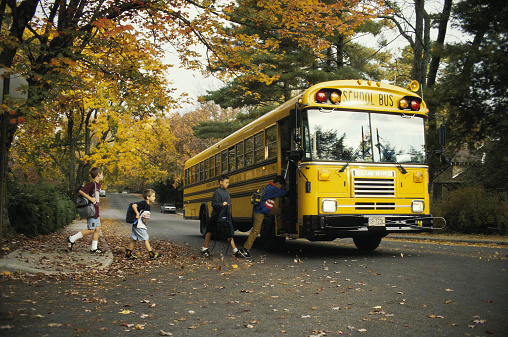