A number of candidates no longer running for president are on Virginia’s Super Tuesday Democratic primary ballot with the same status as the latest front-runners, because no candidates have formally withdrawn from Virginia’s contest.
Listen now to WTOP News WTOP.com | Alexa | Google Home | WTOP App | 103.5 FM

A number of candidates no longer running for president are on Virginia’s Super Tuesday Democratic primary ballot with the same status as the latest front-runners, because no candidates have formally withdrawn from Virginia’s contest.

Sen. Cory Booker and former Secretary of Housing and Urban Development Julián Castro are the first two candidates listed on the ballot, even though neither is campaigning anymore. 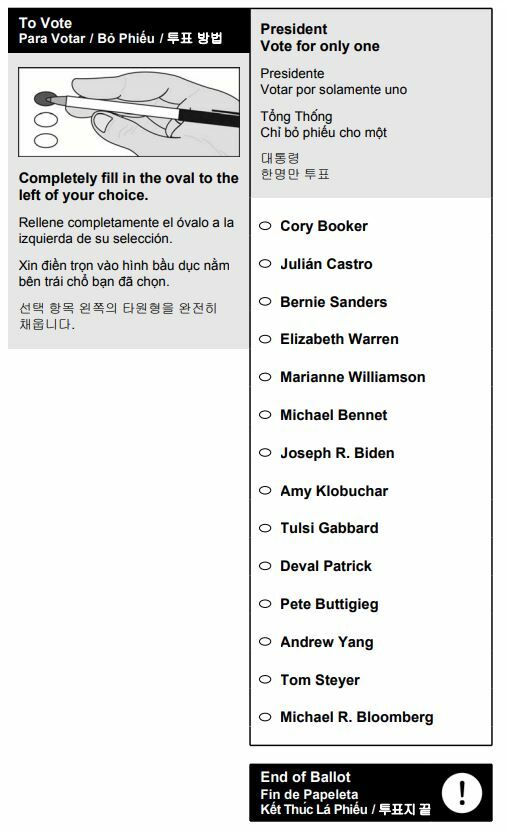 Tens of thousands of Virginians have already cast absentee ballots anyway, starting well before some of the candidates dropped out.

The totals include in-person absentee voting, which ended Saturday, and mail-in absentee ballots handled through the weekend. More ballots have been cast in person than by mail so far in our area, including 8,242 in-person votes in Fairfax County, compared with 5,271 ballots received through the mail.

Thousands more mail-in absentee ballots could still arrive Monday and Tuesday in time to be counted. They must be received by the time polls close at 7 p.m. Tuesday.

Virginia’s primary is open to all registered voters, because the state does not register voters by party. Schools are closed in a number of jurisdictions for the election.

Among candidates who are still running, Sen. Bernie Sanders and Sen. Elizabeth Warren are listed third and fourth on Virginia’s ballot, respectively; former Vice President Joe Biden is listed seventh; and former New York Mayor Michael Bloomberg is listed last of the 14 candidates on the ballot in his first time facing voters this primary season.

In all, Virginia will send 124 delegates to Milwaukee. Ninety-nine of those delegates are allocated and identified over the next few months based on the results of Tuesday’s primary using local city and county caucuses in April, congressional district conventions in May and a state convention in June.

Throughout the process, representatives who reach the congressional district or state level as a supporter of a candidate who does not meet the 15% support threshold to get national delegates at either or both levels can back a different candidate as long as they promise to support that other candidate for the rest of the process.

Instead, the state or congressional district delegates to the national convention that would have gone to that candidate get divided up proportionally based on the primary results among the candidates who do remain in the race.

None of the candidates has filed paperwork with state elections officials to withdraw from Tuesday’s election. They can still file similar documents later with state party officials.

Candidates who do not formally withdraw but who do earn delegates would still see those delegates go to the national convention.