Maximum Security will not run in Preakness Stakes

The owner of Maximum Security says the horse will not run in the Preakness and will appeal his disqualification as the Kentucky Derby winner.

In an interview on the “Today” show, the owner of the horse that was historically disqualified from the Kentucky Derby on Saturday after crossing the finish line first said Maximum Security will not be running in the Preakness Stakes on May 18 in Baltimore.

When it comes to the decision not to race in the Preakness, Gary West said that with no Triple Crown on the line, “there’s no reason to run a horse back in two weeks when you don’t have to.”

West also added that he will be appealing the decision that disqualified Maximum Security from the Kentucky Derby.

“I think they deserve an opportunity to really know what’s going on,” said West in the interview.

He continued, saying that he was “shocked and surprised” that race organizers, “refused, literally refused, to take a single question from the media, so they’ve been about as non-transparent about this whole thing as anything I’ve ever seen in my life.”

Maximum Security was disqualified from the Kentucky Derby for interference. Runner-up Country House, a 65-1 long shot, was then declared the winner by race officials.

West has said he realizes the appeals process will take “months, if not years.” The owner has sought to see replays of the race that stewards used to reach their landmark decision.

The Latest: SEC to use devices to aid with contact tracing 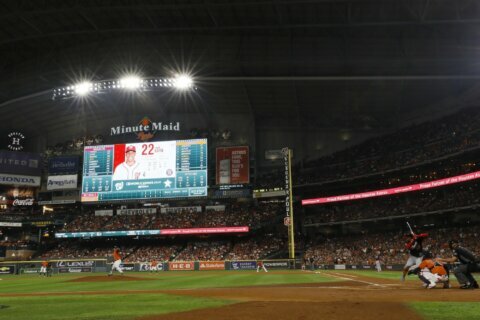