Manson got $18 million in a four-year deal that counts $4.5 million against the salary cap. Lehkonen, who was a restricted free agent, got the same terms.

Acquiring Manson and Lehkonen at the deadline were a couple of the moves that helped Colorado win the Cup for the first time since 2001.

Manson, a 6-foot-3, 218-pound defensemen who turns 31 before opening night, provided some toughness for the high-scoring Avalanche and he had eight points to go along with some key hits in 20 playoff games. Lehkonen scored the Cup-clinching goal in Game 6 against the Lightning and also scored to put Colorado into the final.

Tampa Bay, which had won the past two NHL titles, signed Sergachev for $68 million, Cirelli for $50 million and Cernak for $41.6 million, all through 2031. General manager Julien BriseBois said they were his priority when he traded veteran Ryan McDonagh to Nashville earlier this month.

St. Louis, which won the Cup in 2019 and has remade its blue line since, re-signed Leddy for $16 million over four years. The Blues got Leddy from Detroit at the deadline and plugged him into a unit that has gotten faster and more skilled since bruising to a championship three years ago.

The Blues signed Thomas, who just turned 23, to a $65 million contract extension that carries an $8.125 million cap hit.

Ron Hextall kept his word. So did Kris Letang and Evgeni Malkin. As a result, the Pittsburgh Penguins’ longtime core of Letang, Malkin and Sidney Crosby should now remain intact throughout the duration of their careers.

Letang signed a six-year, $36 million contract earlier this month. Malkin ultimately agreed to a four-year, $24.4 million pact Tuesday night to stay with the team he’s helped lead to three Stanley Cups. The deals allowed Hextall to check off the most important “to-do” items on his list as the general manager entered his second offseason with the Penguins.

“They’re not really good players, they’re generational players,” Hextall said Wednesday. “They make the players around them better. We still feel like we’re in the mix in the top players in the league.”

Hextall called negotiations with Malkin “amicable,” even though it appeared earlier this week that Malkin was going to test the market. Ultimately, the 2012 Hart Trophy winner and two-time scoring champion opted to keep the bond he’s established with Letang and Crosby intact.

Even with all three players in their mid-30s, Hextall pointed to Pittsburgh’s play since he was hired in February 2021 as proof the Penguins remain in the league’s upper tier. The Penguins lost a pair of difficult first-round series each of the last two springs, including a seven-game loss to the New York Rangers in May in a series that was defined by injuries to top Pittsburgh goaltenders Tristan Jarry and Casey DeSmith as well as Crosby and forward Rickard Rakell.

“If you look at the last two years, it gives us faith that this group still and has a chance to do impressive things,” Hextall said.

Mason Marchment signed with the Dallas Stars with a heavy heart one week after dad Bryan died unexpectedly at age 53 while attending the NHL draft as a scout for the San Jose Sharks.

“It’s definitely been a whirlwind,” he said on TSN in Canada. “I’ve never felt emotion like that. But definitely going to a place like Dallas where I know the coaches there and I know what they want from me, I’m just so excited to go and start a new chapter in Dallas.”

Marchment was close to signing with the Carolina Hurricanes before getting $18 million over four years from Dallas. He said familiarity with family friend and assistant coach Steve Spott and some Stars players helped him make his decison.

“Just (wanted) to be around some familiar faces going through this tough time,” Marchment said. “It kind of just felt right.” 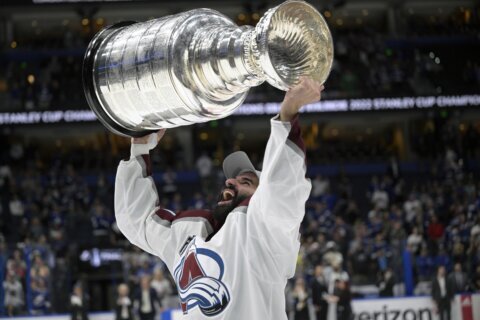