Panthers get Tkachuk from Flames for Huberdeau, Weegar

SUNRISE, Fla. (AP) — Matthew Tkachuk and Jonathan Huberdeau had the best years of their career this past season.

And now they’re changing places in an NHL blockbuster.

Tkachuk was traded to the Florida Panthers on Friday night, with Huberdeau part of the haul that is going to the Calgary Flames for the power forward. Florida also sent defenseman MacKenzie Weegar, prospect Cole Schwindt and a lottery-protected first-round selection in the 2025 NHL draft.

“Matthew is a tenacious, physical competitor who possesses a tremendously unique skillset,” Panthers general manager Bill Zito said. “He is a consistent elite offensive contributor and has emerged as one of the most complete and dynamic young players in the National Hockey League. We are thrilled to be able to add a generational talent to our lineup.”

As part of the move, Tkachuk is under contract with Florida through the 2029-30 season now as well, the Panthers said; a person familiar with the terms said it was worth $76 million over those eight years, speaking to The Associated Press on condition of anonymity because the team had not yet announced it publicly. Tkachuk decided earlier in the week that he would not accept a long-term deal to stay in Calgary — which immediately led to trade talks and no shortage of suitors around the NHL wanting to land him.

The Panthers, a team that won the President’s Trophy this past season for having the NHL’s best regular-season record, apparently wanted him more than most.

They gave up a package headlined by Huberdeau, Florida’s career leader in games, assists and points, to make it happen. The move also breaks up one of the top duos in hockey, after Huberdeau and Aleksander Barkov formed a 1-2 punch like few others with Florida in recent years.

But it never translated into the type of playoff success that Florida is seeking. The Panthers won a playoff series this past season for the first time since 1996, then got swept by Tampa Bay in the second round and scored only three goals in those four games.

“We would like to thank Jonathan and MacKenzie for their immense contributions to the Florida Panthers, both on and off the ice, during their tenures in South Florida,” Zito said. “They have both blossomed into exceptional athletes and people. Their contributions as players and people made an indelible mark on our franchise.”

Tkachuk had career bests of 42 goals, 62 assists and 104 points this past season for Calgary. Huberdeau tied a career best with 30 goals for Florida, plus set marks with 85 assists and 115 points — both of those being franchise records for the Panthers as well.

The trade means Calgary is without its two leading scorers from this past season. Johnny Gaudreau, who led the Flames with 115 points, signed a seven-year deal with Columbus as a free agent last week.

Huberdeau also was extension-eligible this summer, and the Panthers had a decision to make — commit to him with a long-term, big-money deal, or look to make another splashy move.

Tkachuk is 24, Huberdeau is 29, and that surely was something that went into Florida’s thinking when deciding about making an eight-year commitment. The age is one of the few things that separates Tkachuk and Huberdeau on paper: both are about 6-foot-2, both about 200 pounds, both are left wings, both have averaged about nine points for every 10 games played in their NHL careers, Huberdeau was the No. 3 pick in the 2011 draft, Tkachuk the No. 6 pick in the 2016 draft. 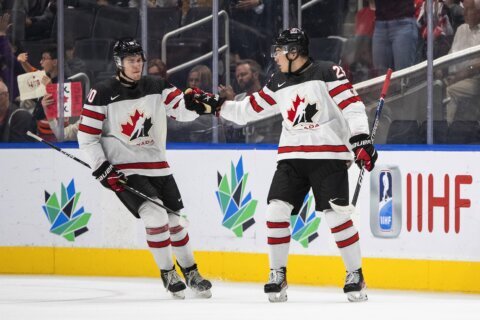