SUNRISE, Fla. (AP) — The Tampa Bay Lightning won the first two games of their playoff series with the Florida Panthers on the road last year.

They’re halfway to a repeat performance.

Pierre-Edouard Bellemare scored the go-ahead goal early in the third period, Andrei Vasilevskiy remained red-hot with 34 saves and the Lightning topped the Panthers 4-1 in Game 1 of an Eastern Conference semifinal series Tuesday night.

“Look at the saves he makes at the times we need them,” Cooper said. “To me, that’s what great goaltenders do and they give you a chance to win a hockey game and that’s what our guy did again tonight.”

Nikita Kucherov and Corey Perry each had a goal and an assist, and Ross Colton also scored for the two-time defending Stanley Cup champions, who went ahead 1-0 against their in-state rivals for the second consecutive season.

Time and again, Vasilevskiy slammed the door on Florida. Over his last three games — all of them wins, including Game 7 at Toronto on Sunday — he’s stopped 94 of 99 shots.

“He brings 100 percent effort every single game and everybody’s just trying to take his energy and bring it to your game,” Kucherov said. “He’s a leader … he’s our best player.”

Anthony Duclair had the goal for Presidents’ Trophy-winning Florida, which got 32 saves from Sergei Bobrovsky. Including the qualifying round that was held when the NHL restarted during the pandemic in 2020, Florida has lost seven consecutive Game 1s — a streak that goes back to 1997.

“They are too good of a team, a veteran team, and they’re not going to open the door for you,’’ Florida interim coach Andrew Brunette said. “We had our opportunities. On to the next game.”

Duclair, a 31-goal scorer, was scratched by Florida for its series-clinching win at Washington, but he was back Tuesday and gave his team the lead by scoring on a pass from Jonathan Huberdeau at 14:01 of the first.

Duclair’s goal came after the Panthers killed off a pair of early penalties — one from MacKenzie Weegar and the other from Duclair — as special teams became a factor in the game.

Florida went 0 for 18 on the power play in the series win against the Capitals and was scoreless on three more tries Tuesday. But Tampa Bay cashed in three of its six chances.

“Part of our game plan was to stay out of the box,” Duclair said. “Their power play has been lethal.”

After Kucherov was hooked by Weegar, he went right around Florida defenseman Aaron Ekblad and fed Perry for a tap-in goal at 16:22 of the second period.

Bellemare’s goal came 3:35 into the third period, giving Tampa Bay its first lead of the game — and the Lightning kept it the rest of the way. The Lightning won a faceoff in the Florida zone and Perry took a quick shot from the slot that Bobrovsky stopped, but the rebound squirted right to Bellemare.

He beat Bobrovsky to the glove side for a 2-1 lead.

It appeared, for a moment, Florida ended its long power play drought and tied the score when Duclair scored on a loose puck. Tampa Bay challenged, saying the puck went off the netting and was therefore out of play. Video review confirmed that and the Lightning continued to lead 2-1.

“We knew, right away our coaching staff told us that wasn’t going to be a goal,” Duclair said. “So you turn the page, get right back at it.”

But it was the last hurrah for Florida. Tampa Bay left no doubt late, with Kucherov and Colton each getting power-play tallies in the final 4:06 to put the game away.

NOTES: It was Cooper’s 124th playoff game with the Lightning. That broke a tie with Mike Babcock (Detroit) for fifth-most with one team, behind only Al Arbour (198, New York Islanders), Scotty Bowman (134, Detroit), Joel Quenneville (128, Chicago) and Glen Sather (127, Edmonton). … Florida fell to 4-8 in Game 1s, including the qualifying round two years ago. … Tampa Bay improved to 15-19 in Game 1s. 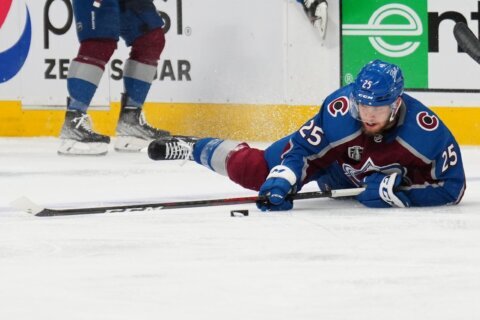 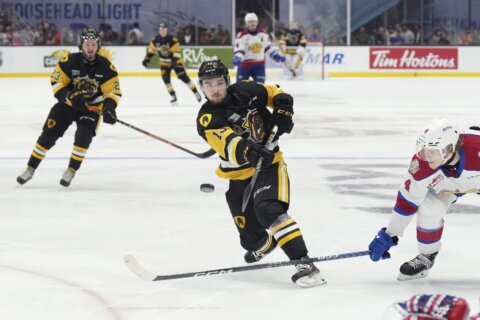