Avalanche win 13th straight at home, 4-3 over Coyotes in SO

DENVER (AP) — Nazem Kadri scored the winner in a shootout and the Colorado Avalanche extended the NHL’s longest home winning streak in nearly four years to 13 games with a 4-3 victory over the undermanned Arizona Coyotes on Friday night.

“Whenever you win 13 in a row at home, a lot of things are working,” Avalanche coach Jared Bednar said. “Different contributions, different guys, good depth going through the lineup. Our top guys have been playing real well and capitalizing on their chances. Different things on different nights.”

Two days after knocking off Toronto 2-1 despite being outshot 46-18, the Coyotes were outshot 47-25 against another top NHL team, but took a 3-2 lead on Shayne Gostisbehere’s goal 39 seconds into the third period.

All-Star Clayton Keller had his first career short-handed goal and Johan Larsson also scored for Arizona, which went 0 for 3 in the shootout.

Kadri, left off the Central Division All-Star roster, then swung the puck around and beat Ivan Prosvetov with a forehand.

“Kind of a joke he’s not an All-Star with the year he’s having,” Jost said. “The patience he had with the puck, the skill he displayed. He does it every night, does something special with the puck.”

Prosvetov, called up from the minors this week, made 44 stops for Arizona in his second NHL game of the season. That included a sprawling leg save on Valeri Nichushkin in overtime.

Prosvetov has played in five NHL games, and three have been against the Avalanche.

“Back in the day, when I was younger, the best goalie in the league was Semyon Varlamov. I was watching him when I was a very young kid and he played for the Avalanche. So I was always playing for the Avalanche in Xbox and stuff,” Prosvetov said. “Definitely funny how life goes.”

The Avalanche have trailed in every game of their 6-0-1 stretch. This time, they blew a 2-0 first-period lead.

Larsson’s goal at 6:12 of the second tied it at 2. Keller got one back late in the first when he stole the puck from Devon Toews while on the penalty kill and muscled a shot past Francouz that trickled over the goal line.

Colorado’s maligned power play killed off a two-minute 5-on-3 in the second period, but the Avs had trouble shaking off one of the NHL’s worst teams. Colorado went 0 for 5 on the power play.

“Our guys did a heck of a job getting into shot lanes, blocking shots, paying a price. And Provy made some huge saves for us,” said Coyotes acting coach Phil Housley, who filled in for Andre Tourigny (COVID-19 protocol) for a second straight game. “Terrific penalty kill. Big difference in the game why we got that point.”

Colorado jumped on Arizona quickly when Rantanen knocked in a rebound at 4:36 for his 17th goal, and Jost scored off Kurtis MacDermid’s nifty wraparound pass at 12:03 as Arizona’s makeshift defense struggled early.

Kyle Capobianco was the latest Coyotes defenseman to be placed in COVID-19 protocol before the game, joining Jakob Chychrun, Cam Dineen and Anton Stralman.

Colorado’s Nathan MacKinnon, who will captain the Central Division All-Star team for the third straight time, said it was “silly” that Kadri didn’t make the squad.

MacKinnon added he doesn’t believe each team should be represented.

“It’s an All-Star Game, not a participation game,” he said.

Kadri, who leads the NHL with 35 assists, is one of eight players vying to be voted in by fans as the last Central Division player.

The Coyotes host the Avalanche on Saturday night to complete a home-and-home set. Colorado goaltender Darcy Kuemper, traded by Arizona in the offseason, is scheduled to start. 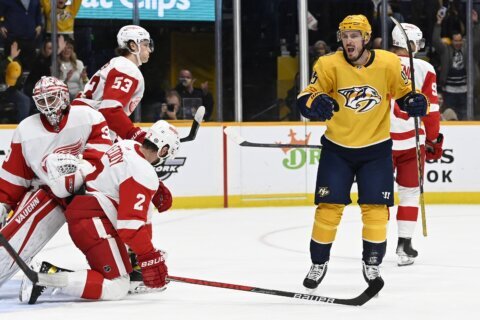 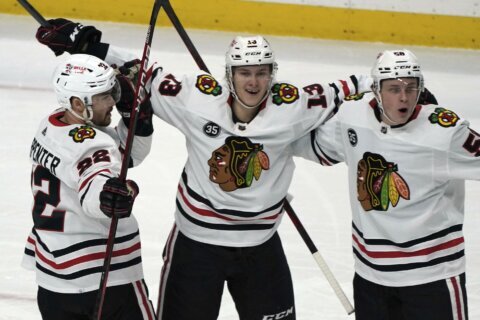