Eeli Tolvanen, Tanner Jeannot and Luke Kunin also scored, and Juuse Saros made 20 saves for Nashville, which has won two of its last three games.

“We went out and had to come from behind again, but I thought we played pretty well in the third period, and it’s nice to see us be able to get the win from it,” Nashville coach John Hynes said.

Jake Allen made 40 saves and Nick Suzuki, Christian Dvorak and Brett Kulak scored for Montreal. Cole Caufield had a pair of assists for the Canadiens, who have lost five of six.

On the winner, Forsberg took a cross-ice pass from Mikael Granlund and sent it past Allen. Just before receiving the pass, Forsberg had to retrieve his stick, which was dropped a few seconds prior.

“I wouldn’t call it a set play, but it worked out,” Forsberg said.

Tolvanen scored the game’s first goal at 4:52 of the opening period. Mattias Ekholm fired a one-timer from the left point that deflected off of the shaft of Tolvanen’s stick and by Allen for his second goal of the season.

Suzuki made the game 1-1 at 4:48 of the second. With Montreal on a power play, Suzuki snapped a wrist shot from the high slot that beat Saros on the stick side just underneath the crossbar. The goal was Suzuki’s first in 10 games.

“I tried to shoot the puck a lot today and luckily one went in,” Suzuki said. “It was definitely nice to get a goal and help out and score on the power play, give us a boost of confidence there.”

Dvorak made it 2-1 at 10:01 of the second. After Montreal raced to negate an icing call, Suzuki put a rebound past Saros from just outside the crease.

Jeannot tied the game at 2-2 at 17:24 of the second when he redirected Ekholm’s shot past Allen for his sixth goal of the season.

Ekholm’s two assists were his first multi-point game of the season.

Early in the third with the game tied 2-2, Caufield carried the puck into the Nashville zone on the right side. He found Kulak trailing the play, and Kulak beat Saros with a wrist shot to the glove side at 3:10 of the third.

Saturday was Kunin’s 24th birthday and he was certainly active in the game, recording a “Gordie Howe hat trick” of a goal, assist and fighting major.

Kunin picked up the secondary assist on Tolvanen’s first period goal and also fought Kulak early in the third.

“The birthday boy gets a Gordie Howe hat trick, it doesn’t get better than that,” Forsberg quipped after the game. “The way he competes out there and the goal he scored is the ultimate proof of that. He does a little bit of everything for this team, which is very fun to watch.”

Tolvanen’s goal ended a 22-game scoring drought. Tolvanen had not scored since Nashville’s opening game of the season, Oct. 14 against the Seattle Kraken.

As a rookie in the 2020-21 season, Tolvanen scored 11 goals in 40 games. Six of his goals came on the power play, leading all Nashville scorers.

Nashville center Colton Sissons played his 400th career NHL game Saturday, all with the Predators. Nashville selected Sissons in the second round (50th overall) in the 2012 Draft. 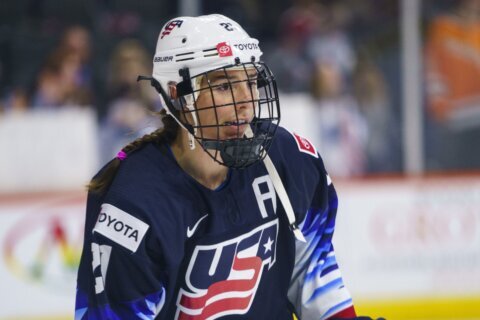 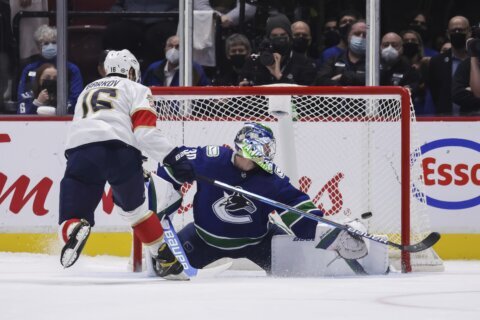