ST. PAUL, Minn. (AP) — Timo Meier had a goal and an assist to keep up his strong start, and the San Jose Sharks beat the Minnesota Wild 4-1 on Tuesday night.

Mario Ferraro, Erik Karlsson and Tomas Hertl also scored for San Jose. Logan Couture and Rudolfs Balcers had two assists, and James Reimer made 26 saves as the Sharks won for the second time in six games.

“It was a complete team win. I thought every line gave us something tonight; I thought all the D that played were excellent, and had good goaltending,” San Jose coach Bob Boughner said. “We came out ready to play a solid road game.”

“The start is not bad, but I know I can take another step and make some better, more consistent plays and even take the next step. I want to be the best player I can be for the team,” said Meier, who was challenged by his coaches after last season to be more detailed throughout his game.

“I think he’s finally bought in that the better he plays defensively, the less he’s going to be in his own end. He’s been doing some great things in the offensive zone that he wasn’t doing last year,” Boughner said. “He’s getting to the point in his career where he understands the way he has to play to have success. This is the best hockey I’ve seen him play.”

He got the second assist on Ferraro’s early goal and scored on a nice individual effort with 42.2 seconds left in the opening period for a 2-0 lead. Meier carried the puck into the right circle, turned outside and sent a pass back to Marc-Edouard Vlasic at the point. Vlasic’s shot hit traffic in front but deflected to Meier who was charging in from the right side for an easy goal from just below the dot.

“We left some guys open and not really pushing guys up the wall, just looked a little bit sluggish. That team made plays and played with confidence,” Minnesota’s Marcus Foligno said.

Playing the fourth game of a five-game road trip, San Jose was looking for a better performance after a 6-2 drubbing Saturday in Colorado.

“We did a lot of good things well that we’ve done all year. It was good to rebound after a tough game,” Couture said.

After a nifty stick-handle around Hertl, Eriksson Ek’s shot from the right circle beat Reimer 5:25 into the second period, but Karlsson’s top-corner shot 4 minutes later during 4-on-4 action pushed the San Jose lead to 3-1.

Looking for its sixth win in nine games after the opponent scores first, Minnesota moved leading goal scorer Ryan Hartman between Kirill Kaprizov and Mats Zuccarello in the third period to no avail. Kaprizov had two shots on goal and has a mere eight in his past four games. The 2021 Calder Memorial Trophy winner has three goals in 15 games after scoring 27 in 55 outings last season.

“He’ll find his way,” Wild coach Dean Evason said. “Yeah, for sure he’s getting special attention. But he got special attention last year, too. It didn’t take very long for the league or our division last year to know how good he was, right? They were still putting top defensemen against him and special concentration. So, he’ll fight through it. His work ethic is good enough it’ll come around.”

NOTES: San Jose D Radim Simek was a healthy scratch for the first time this season as the Sharks continue to look for a consistent third pair of defensemen. D Santeri Hatakka drew back in. … Minnesota was 0 for 2 on the power play, and is 2 for 16 in its past six games. 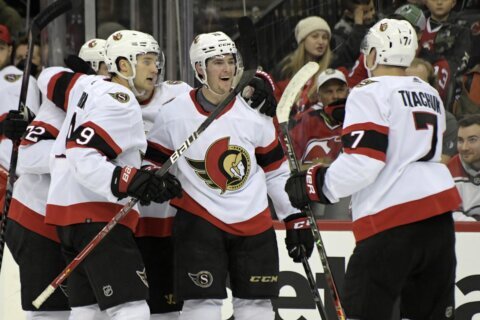