DALLAS (AP) — Rookie Tanner Jeannot had a goal and an assist, Juuse Saros stopped 25 shots, and the Nashville Predators beat the Dallas Stars 4-2 on Wednesday night.

Ryan Johansen, Matt Duchene and Colton Sissons also scored for the Predators, who are 6-1-1 in their last eight games. Sissons scored an empty-net goal from his own blue line with 43 seconds left after Dallas cut a 3-0 deficit to 3-2.

Jeannot, who signed with Nashville as an undrafted free agent in April 2018 following four seasons in the Western Hockey League, has five goals, one short of the NHL rookie lead.

“I’ve just been having a blast,” said Jeannot, who scored five goals in 15 games late last season. “I’ve worked my whole life to get here, and I just want to continue to get better every day.”

Roope Hintz and Miro Heiskanen scored for Dallas, which has lost six of its last seven games (1-4-2). Braden Holtby made 18 saves.

The team held a players-only meeting afterward. The first questions to Stars coach Rick Bowness were about the meeting.

“I know exactly what’s wrong with this team, and we’re going to fix it,” Bowness said, and then he left the podium.

“We just had a talk with the group there,” said Hintz, who scored a career-high 43 points in 41 games last season. “That stays there.”

In the final minute of a bump-and-grind opening period, the Predators converted a give-and-go between Johansen and Jeannot for the game’s first score. Jeannot shoveled over a pass while blanketed by Esa Lindell, and Johansen lifted a backhander at the goal line over the sprawled Holtby with 51.4 seconds left in the period. It was Johansen’s fifth goal in 13 games after scoring only seven in 48 games last season.

Jeannot scored his fifth of the season at 4:51 of the second period for a 2-0 lead. He took a pass from Tomasino from the neutral zone, skated quickly through the right circle and managed to get off a left-handed shot that sailed under Holtby’s blocker arm into the far side of the net.

“The reason he’s having success is he plays to his identity as a player,” Predators coach John Hynes said of Jeannot, who was teamed with fellow rookie wing Philip Tomasino with Johansen, the team’s veteran No. 1 center. “I think we all know he has the opportunity to put the puck in the net, has a scoring touch, but not to change his game.”

Duchene made it 3-0 with 2:24 remaining in the second with a short-side wrist shot over Holtby’s glove, his team-high sixth of the season.

Hintz tipped in a loose puck in the crease 15 seconds after Duchene’s goal for his first of the season.

Heiskanen rammed home a lefthanded wrist shot just to Soros’ left on a power play at 10:43 of the third for his third and team-leading 12th point in 12 games.

The Predators played short a defenseman from the middle of the second period after Alexandre Carrier took a one-timer from Tyler Seguin to the right side of his helmet near the Nashville net. Hynes said Carrier will accompany the team to St. Louis and be reevaluated Thursday.

Soros’ career record vs. the Stars is 10-3-1. … With an assist, Dallas’ Joe Pavelski has a five-game point streak. … Playing to form, Nashville is 4-0-0 when leading after one period while Dallas is 0-4-0. … Heiskanen’s goal gave the Stars a power play goal in five straight games. … Wednesday’s game began a Dallas stretch of nine of the next 11 at home. … Predators defenseman Mark Borowiecki missed his fourth consecutive game with an upper body injury.

Predators: At St. Louis on Thursday night to close a stretch of six consecutive road games, already their third road back-to-back this season.

Binnington rebounds, Blues rally to beat Lightning 4-3 in SO 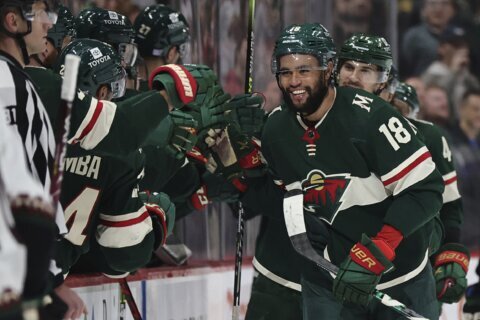