The Islanders recorded consecutive road shutouts after blanking Arizona 3-0 on Saturday. The Islanders improved to 22-4-4 on the back end of back-to-back games under coach Barry Trotz, who took over in 2018.

Sorokin, who has started all six games for the Islanders, improved to 3-2-1. It was the first time Sorokin ever started in net on back-to-back games.

“In typical (Sorokin) fashion, I thought he was really dialed in,” Trotz said.

New York has played its first six games on the road, part of a season-opening 13-game road trip while the team awaits the opening of its new home, UBS Arena.

“People forget we had six preseason games on the road, we’ve been grinding through that,” Trotz said. “A long road trip, which we got off to a tough start and we’ve had to piece it together. It’s hard getting the wheels turning sometimes. You gotta get through the grind.”

And while the Islanders are grinding through a brutal stretch of road games, the Golden Knights are battling the injury bug. Ten players have missed at least one game through Vegas’ first five games, including its top-line forwards Mark Stone and Max Pacioretty.

“While those things are great, we still have to find a way to win games.”

Vegas goaltender Robin Lehner (1-4-0) made 24 saves in his fifth straight start, matching the most consecutive starts he’s had since joining the Golden Knights. Lehner last started five straight during the 2020 playoffs, spanning series against Chicago and Vancouver.

Vegas has been outscored 16-6 during a four-game losing streak and is now tied with four other teams for the third-fewest goals-for per game (2.00).

The Golden Knights failed to capitalize on two power-play attempts and are now 0 for 11 with a man advantage this season. They’re the only team without a power-play goal this season. Vegas’ long-term power-play drought is now 0 for 27 dating to June 6, which was Game 4 of the second round of last year’s playoffs.

Looking like anything but a team that was playing the second of back-to-back nights, let alone its sixth in 11 days, the Islanders came out fluid and active, striking first, a little more than two minutes into the game.

After Jean-Gabriel Pageau sent a shot from the slot, Lehner made the initial save with his pad before falling flat on his stomach and unable to recover in time for the rebound, which Bailey was able to bury and give the Islanders a 1-0 lead.

Barzal made it 2-0 midway through the third period with a shot over Lehner’s left shoulder from a steep angle.

“Tail-end of a back-to-back, on a long trip, I think getting off to a quick start and getting the lead is certainly a good thing,” Bailey said.

NOTES: Daniil Miromanov made his NHL debut with the Golden Knights. … Islanders broadcaster Butch Goring was in the booth to call the game, returning to the city where he was the first coach of the IHL’s Las Vegas Thunder (1993-94).

New York: Visits Nashville on Saturday after a five-day layoff. 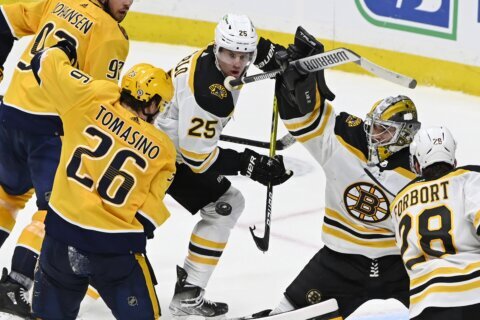 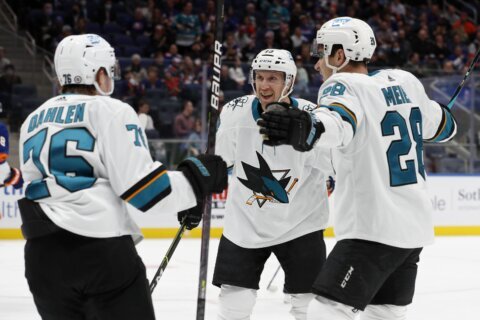